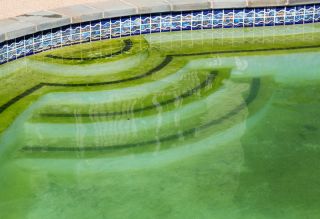 Olympic officials in Rio de Janeiro announced this past weekend that they had found out why the water in two pools turned bright green, but their explanation has at least one chemist scratching her head.

The confusion comes down to an understanding of basic chemistry and swimming pool maintenance, said Susan Richardson, a professor of chemistry at the University of South Carolina and a former pool owner.

On Saturday (Aug. 13), Olympic officials said they had definitely found out why the water in two of the swimming pools turned an unusual green color, The New York Times reported.

"Someone, the officials said, mistakenly added 160 liters [42 gallons] of hydrogen peroxide on Aug. 5, neutralizing the chlorine and allowing the growth of 'organic compounds' that might have included algae," the Times said. [The Twisted Physics of 5 Olympic Sports]

But Richardson said that hydrogen peroxide — an antiseptic that kills bacteria — is not used in pools, as far as she is aware. Though Richardson isn't involved with the pool maintenance in Rio, she has based her response on news reports of the pools' colors.

And the official explanation offered at the Rio Olympics leaves her skeptical. "My suspicions are that somebody just wasn't paying attention, wasn't doing their job for making sure that there was enough chlorine in that pool," Richardson told Live Science. "And then they're trying to reach for some excuses."

If hydrogen peroxide were poured into a pool, it would quickly react with the chlorine-containing liquid bleach (NaOCl) in that pool and disable it, Richardson said. More specifically, hydrogen peroxide (H2O2) reacts with sodium hypochlorite (NaOCl) to form oxygen (O2), sodium chloride salt (NaCl) and water (H2O), she said.

As hydrogen peroxide reacts, it forms water (H20), and its signature bubbles, or fizz, which is really oxygen (O2), Richardson said.

If enough hydrogen peroxide were poured into a chlorinated pool, it would react with all of the bleach, until there wouldn't be any chlorine left to kill algae and other organisms that thrive in warm pools, she said.

"I didn't try to do the math," Richardson said. "Generally, in a pool, you're going to have anywhere from 1 to 4 parts per million of chlorine. If that 160 liters is enough to … react with the chlorine in this large pool, you will have probably degraded it [until there isn't any left]," she said.

However, when Olympic officials monitored the pools, they found the proper amount of chlorine in the pools, but didn't know that the chlorine wasn't working, Gustavo Nascimento, director of venue management for the Rio Olympics, told the Times.

Live Science reached out to Olympic press officials, but they did not immediately respond to comment. [In Living Color: A Gallery of Stunning Lakes]

It's likely that algae caused the green hue in the two Olympic pools, Richardson said. As someone who has owned a pool for more than 25 years, Richardson advised using large amounts of chlorine (called a chlorine shock) to get rid of the algae.

The chlorine shock kills algae, which die and fall to the bottom of the pool, she said. Then, the dead algae, which look like pieces of dirt, can be vacuumed up. The whole process would probably take about 24 hours for the Olympic-size pool, she added.

However, Rio officials opted for a faster solution, mainly so that the synchronized swimmers would have clear, blue water in time for their competition, the Times reported. Officials drained the 984,040-gallon (3,725,000 liters) pool with green water, and replaced it with clear water from a practice pool, the Times said. Nascimento, who spoke with the Times the day before the switch, estimated that it would take about 10 hours in total.