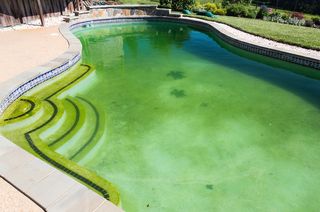 When the water in Rio's Olympic outdoor diving pool turned bright green yesterday, people were baffled about what could have turned the water such an unusual hue. Some suggested that the green came from oxidized copper in the pool's pipes, but others wondered whether urine was the culprit.

Now, Olympic officials are saying that extensive testing shows that a chemical imbalance caused by too many people using the water was the reason for the color change, the New York Times reported.

A sudden decrease in the alkalinity in the pool was the main reason for the color change, Mario Andrada, a Rio 2016 spokesman, said Wednesday morning, according to the Times.

Previously, the Rio 2016 Local Organizing Committee said that algae was the offender, according to CNN.

Algae could have proliferated because of too much heat and a too little wind in the venue, CNN reported. Tests showed that the vivid green water doesn't pose a health risk to athletes, the committee said in a statement, according to CNN. [In Living Color: A Gallery of Stunning Lakes]

The show goes on

Events in the Maria Lenk Aquatics Centre are expected to continue as planned, the Rio 2016 Local Organizing Committee said in a statement.

Athletes and fans alike reacted to the green color on Tuesday (Aug. 9) with puzzlement. Tom Daley, who won a bronze medal in synchronized diving for the United Kingdom earlier this week, tweeted "Ermmm...what happened?!"

However, the games went on, with athletes diving into the green water. On Tuesday evening, Olympic officials tweeted, "The water quality at the Maria Lenk Aquatics Centre was tested and there were no risks for the athletes. We are investigating the cause."

Olympic officials plan to test the pool's chemical levels more regularly than before, Rio spokesman Mario Andrada told USA Today. Andrada also said the pool would be blue again today (Aug. 10), but that's not yet the case, according to Gizmodo.

Moreover, the green pool now has company: The water in the Olympic polo pool is turning green, too, Gizmodo reported, and several polo games are scheduled for today and tomorrow.

Editor's note: This story has been updated as more information about the pool's color change has become available.