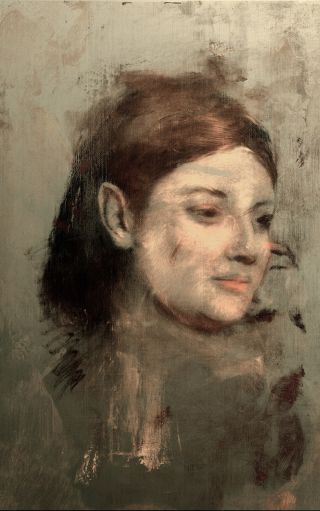 A hidden portrait of a mysterious woman has been found under a painting by the French artist Edgar Degas, according to a new study.

Researchers used X-rays to peer through the layers of one of Degas' paintings, uncovering the "lost" work, which the artist later covered with another painting.

The researchers made the discovery by scanning the painting with X-rays to map metallic elements in the pigments on the canvas. Data from the scan were used to build a 31-megapixel image of the hidden portrait in almost photographic detail. [See Photos of the Hidden Portrait Found Behind Edgar Degas' Painting]

"There has been a long-running question about what was underneath this picture," study lead author David Thurrowgood, a conservator at the Queen Victoria Museum and Art Gallery in Australia, told Live Science. "The question has been asked since the 1920s, and we are pretty excited to finally give the answer."

The new research centers on "Portrait of a Woman," which Degas painted sometime between 1876 and 1880, the researchers said. The painting was purchased in 1922 by Australia's National Gallery of Victoria (NGV) in Melbourne, Australia. A discoloration, caused by the older painting showing through the later portrait, was already visible at that time, and more of the outline of the hidden painting has been emerging, Ted Gott, a senior curator at the NGV, wrote in a 2008 article published in the Art Bulletin of Victoria.

Infrared and conventional X-ray photography revealed the ghostly image of a woman — one that was noticeably different from the female in the final portrait — who had been painted upside down on the same canvas. But the details of the hidden painting and the identity of its subject remained unknown until now.

To solve the mystery of the painting, Thurrowgood and his colleagues secured the artwork in a moving cradle in front of a stationary X-ray beam and X-ray detector at the Australian Synchrotron in Melbourne.

The details revealed in the new composite X-ray scan of the hidden image enabled the researchers to make a positive identification of the woman in the hidden portrait as Emma Dobigny, an artist's model who sat for Degas and other painters in the 1870s, Thurrowgood said. [Gallery: Hidden Gems in Renaissance Art]

In fact, the hidden portrait appeared to be a different version of another portrait of Dobigny by Degas.

"It is a quite famous painting by Degas that isn't seen very often — it's held in a private collection, and unfortunately, it's only been shown a few times," Thurrowgood said. "So I think there's going to be a lot of interest as people discover there is another version of that painting."

The new research into the hidden portrait has also revealed signs of Degas' technical processes, including the difficulty he faced with drawing ears, which appear to have taken him several attempts before he settled on the final shape.

"By layering different element maps and introducing false colors into the image to highlight how different parts of the painting were built up with different layers of pigment, you can get a real sense of how the artist might have been mixing [pigments] and working," Thurrowgood said.

Future applications of the new research could include creating a timeline of snapshots of a work as it was painted, particularly with oil paintings, where each layer of paint is typically left to dry before further layers are added, he said.

Although X-ray fluorescence has been used to examine other paintings, until now, the process typically took several days to produce low-resolution maps of just two or three metallic elements used in pigments.

But the new techniques developed by Thurrowgood and his colleagues allowed the researchers to scan the Degas portrait in just a day and a half, and to generate high-resolution image maps with data from 10 or more target elements.

Thurrowgood said a key breakthrough was the development of new software to handle the data produced by the scanning process, which makes simultaneous measurements of several kinds of responses to X-rays for each pixel-size area of the painting.

"When we do something like this, we produce huge quantities of data, and one of the bigger challenges is to de-convolute that data and turn it into meaningful information," Thurrowgood said. "By being able to deal with the individual elements and overlay the images, particularly by adding false color, it gives us a lot of information about how the painting was constructed, such as if there were any alterations over time." [9 Famous Art Forgers]

With conventional methods of analyzing paintings, “you use just a single paint chip, whereas this gives us data across the whole painting," he added.

Just one thing is missing from the new image of the hidden portrait: Dobigny's clothes. Only her face is visible in the new recreation.

"We're pretty sure it's close to what it really looks like, but we think the reason we're not getting the garments around the figure is that they've been painted with a blue pigment based on organic dies that won't respond to an X-ray treatment," Thurrowgood said.

"There are very faint hints of it in the data we do have, from the trace elements that are there," he said. "But if we could pick that up, then we would actually have a picture which was almost identical in composition and color to the other known painting of Emma Dobigny by Degas."

But Degas' use of an organic blue pigment was an interesting detail in and of itself, he added.

"The fact that we have found the absence of data there does support the fact that Degas was using these vibrant new colors very early on, because they had only recently been created for the market," Thurrowgood said. "So it is actually quite useful in understanding the artist and the painting."

The new findings were published online today (Aug. 4) in the journal Scientific Reports.