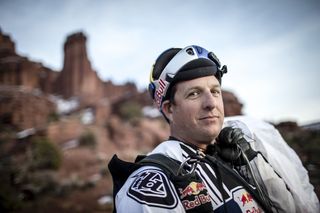 Skydiver Luke Aikins became the first person to jump from a plane without a parachute or wingsuit this past weekend, carrying out the daring stunt on live television. Aikins jumped from a height of 25,000 feet (7,600 meters) and, after a two-minute fall, flipped onto his back to land in a 100-foot-by-100-foot (30 m by 30 m) net, according to news reports. How did the daredevil pull off such a heart-stopping stunt?

To accomplish such a jump with a parachute, a skydiver would typically jump from the plane, free-fall at 120 mph (190 km/h) or faster and then, at higher than 2,500 feet (760 m) above the ground, deploy the parachute, according to Nancy Koreen, spokeswoman for the U.S. Parachute Association. The parachute works to slow the skydiver's descent enough for a safe landing, she told Live Science.

Without a parachute, a skydiver would continue to fall at 120 mph, a speed at which it would be fatal if the person hit the ground, she said. However, instead of hitting the ground, Aikins fell into a net in Simi Valley, California, reported CBS News. "That was what he used to survive," Koreen said. [8 Craziest Skydives of All Time]

But did Aikins' movements, such as flipping onto his back or tumbling in the air, slow his fall? Not by much, Koreen said. To slow down, a skydiver can spread his or her limbs to increase surface area, but "that will only slow you down maybe 10 miles an hour [16 km/h] — not substantially. You're still falling above 100 miles an hour [160 km/h]," Koreen said.

Yet, even in a jump without a parachute or wingsuit, locating a landing site (in this case, a large net) is not as difficult as people may think, said Jean Potvin, a professor of physics at the Parks College of Engineering, Aviation and Technology at Saint Louis University in Missouri.

"And obviously he practiced that move a lot," Potvin told Live Science.

Aikins' helmet gave him GPS alerts throughout the dive, and lights on the net, visible from altitudes of more than 25,000 feet (7,600 m), turned red when he was off-track and white when he was on course, according to CBS News.

Still, finding the net is not as simple as jumping out of a plane directly above the target and falling straight down, Potvin said. The plane is moving forward at the time of the jump, which means the skydiver leaves the plane on a forward trajectory, Potvin said, speculating that Aikins probably jumped from the plane before it flew over the net.

So how does a falling skydiver steer his body toward a target on the ground? Aikins' maneuvers in the air were efforts to do just that, Potvin said. As Aikins falls from the plane, he does something called "tracking."

"Instead of falling like an X … he brought his arms back along his body, and so we call that tracking, so it means that what he did there is he started to glide forward and direct himself to the center of the net," Potvin said. Skydivers can also direct themselves backward, he added. [Photos: Skydiver Sean MacCormac 'Surfs' on Thunderstorm Clouds]

And just before hitting the net, Aikins flipped over onto his back so that his body would bend in the direction the back is flexible — toward the front, Potvin said. "[Aikins] had to land on his back to not break his spine, basically," he said.

But the net, made of a polyethylene cord that is twice strong as steel, prevented that from happening, reported National Geographic.

"The net absorbed his fall, dissipated his energy, and allowed him to survive the jump and actually walk out of it," Potvin said.

Potvin, who is a skydiver himself, said he was impressed by the feat. But not everyone was captivated by Aikins' jump.

Michael Turoff, a skydiver and co-author of the book "Parachuting: The Skydiver's Handbook" (Para Publishing, 2007), called it "a ridiculously dangerous stunt that could have easily resulted in a fatality."