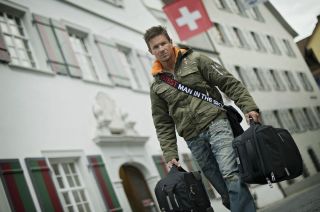 On Monday (Oct. 8), Austrian skydiver Felix Baumgartner will ascend more than 120,000 feet into the atmosphere inside a capsule attached to a helium balloon. Then, with nothing but a pressurized suit and a parachute, Baumgartner will jump out of the capsule and plummet toward Earth, breaking the sound barrier on the way down.

What could go wrong?

Quite a few things, it turns out — though Baumgartner and his Red Bull-sponsored team say they have considered and prepared for the risks. Here are five of the dangers that Baumgartner faces as he attempts a record-breaking leap.

The problem: In low air pressure, high-altitude skydivers risk going into something called "flat spin." In this position, the body rotates horizontally — imagine a record spinning on a record player. An uncontrolled flat spin could render Baumgartner unconscious, his blood rushing to his extremities, including his head. There, blood could pool in his eyes, causing temporary blindness. Worse, the force of the spin and the rush of blood to the head could cause massive brain bleeding and clotting, which could easily be fatal.

The prevention: If Baumgartner's spin gets out of a control, a special elongated parachute will deploy to help stabilize his descent.

The problem: At the edge of space, from which Baumgartner will make his leap, the air pressure is less than 1 percent of that on Earth's surface. Above 63,000 feet (19,200 meters), the lack of pressure can cause air bubbles to form in the blood, a condition referred to as blood boiling. A bubble large enough to stop the blood from flowing in a major artery could be fatal, and sudden decompression can expand and then collapse the lungs. Depressurization can also cause the body to swell in seconds, as occurred in 1960 when Capt. Joseph W. Kittinger Jr. jumped from 102,800 feet (31,133 m). When Kittinger's glove failed to pressurize properly, his hand swelled to twice its size on  descent. [8 Craziest Skydives Ever]

The prevention: Baumgartner's full-pressure suit and helmet are designed to protect the skydiver as he falls. The team has emergency medical protocols in place should Baumgartner arrive on the ground in crisis.

The problem: The upper atmosphere is a very cold place. The Red Bull Stratos team estimates Baumgartner will step out of his capsule into temperatures of minus 10 degrees Fahrenheit (minus 23 degrees Celsius). As he plummets, he could experience minus 70 degrees F (minus 56 degrees C) or lower. In such cold air, Baumgartner's body would be unable to maintain a core temperature of 98.6 degrees F (37 degrees C) for long. When body temperature drops to 82 degrees F (28 degrees C), unconsciousness can occur. Death is likely when the body dips below 70 degrees F (21 degrees C).

The prevention: Baumgartner's suit should protect him from temperatures as low as minus 90 F (minus 68 C).

The problem: As Baumgartner's body approaches the speed of sound, he'll be playing with some serious forces. Shock-shock interaction occurs when shock waves, also known as sonic booms, in the air collide, in this case the stratosphere that Baumgartner is descending through. Such forces could buffet Baumgartner and possibly endanger him or his pressurized suit. "[Baumgartner will] be colliding with the gas so fast that it can't flow out of his way because it effectively doesn't know that he's coming," physicist Louis Bloomfield of the University of Virginia, told LiveScience's sister site Life's Little Mysteries.

The prevention: According to the Red Bull Stratos team, the thin air is an advantage in this case. Shock waves are less powerful when the air is less dense.

The problem: Hitting the ground without slowing down enough from a 120,000-foot fall is a very bad idea.

The prevention: Should Baumgartner fall unconscious during his skydive, his emergency parachute will deploy automatically. Unfortunately, he may not be out of the woods in that scenario, as he will be unable to steer his landing or adjust his speed in the final moments of the fall. That could make for a difficult return to Earth.