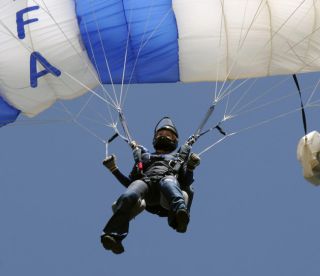 United States Air Force Academy Cadet Caroline White, an AM-490 jump instructor for the 98th Flight Training Squadron, prepares to land after making sure all of trainees land correctly July 20, 2006. The academy's AM 490 jump training course is roughly an eight day course with three to four days of grueling ground training followed by the students getting in Twin Otter airplanes and putting their new skydiving skills to the test in the air.
(Image: © U.S. Air Force/Matthew Hannen)

Faulty parachutes can obviously kill skydivers, but more often human error is involved, says an ER physician who practices and studied the sport.

As a skydiver who has treated parachutist injuries and has himself suffered injury, Dr. Anton Westman at Umea University Hospital in Sweden wanted to examine the question of whether the human factor plays a greater role than the equipment in causing injuries and deaths.

"The short answer is yes," Westman said. "The longer answer is that my thesis is ultimately about the interaction between humans and their tools and technology."

Westman conducted six studies for his dissertation work at Umea University, where he assessed injuries among skydivers and BASE jumpers who leap from tall objects rather than airplanes. He found that the risk of death per skydive in Sweden compares roughly to the risk of a mother dying during childbirth, or close to 1-in-100,000. However, skydivers may also typically make 10 jumps within a day, upping their accident odds.

Not controlling for instability in early freefall arose as a main problem, Westman found, when parachutists and especially beginners would lose control and start tumbling wildly. That in turn could result in parachute entanglement or failure to activate the chute.

Even the experienced Westman encountered this problem in 2005, when his left shoulder was dislocated by the airstream during freefall. He managed to regain control and relocated his shoulder in midair, while keeping his legs spread to maintain stability.

Accidental water landings also contributed to deaths, especially with lack of life jackets or life jacket malfunctions, along with accidental activation of the reserve chute in the water.

One of every three fatalities had their parachutes open at some point. And one in every four survived high-speed impact against the ground or water, only to die during transport or in the hospital. But parachutists who hit the ground at terminal velocity above 124 mph probably died instantly.

Parachuting as a sport evolved from parachuting out of necessity. Balloonists used primitive parachutes in the 19th century, and the aerial dogfights of World War I highlighted the need for flyers to have an escape mechanism.

Modern skydiving represents a much safer activity, even compared with the earlier years of recreational parachuting. Members of the U.S. Parachute Association reported 821 injuries and 18 deaths out of 2.2 million jumps in 2007.

BASE jumping, or parachuting from tall objects such as buildings or cliffs, remains a riskier prospect. One of the most frequent problems involved the parachute opening toward the object that parachutist jumped from, so the subsequent collision could injure or kill the BASE jumper.

Getting numbers on BASE jumping has proven difficult because the activity remains unregulated and partly illegal. But Westman worked out some rough estimates, based in part on the work of American BASE jumping pioneer Nick Di Giovanni, who has kept track of deaths since 1985 at the World BASE fatality list.

"It is very difficult to give a valid figure for BASE jumping, but our best estimate is that the overall annual fatality risk in BASE jumping is approximately 60 to 90 times higher than in skydiving," Westman told LiveScience.

Westman dedicated his work in part to Lukas Knutsson, a BASE jumping mentor who died in an incident in Switzerland on October 11, 2002, when turbulence caused the chute to become entangled in a bridle.

Equipment has also played its role at times, if only by placing greater demand on human concentration and skill. Wing parachutes designed for flying and landing at speeds over 62 mph caused a worldwide increase in fatalities among BASE jumpers.

Safety need not trump fun in the end, Westman suggested. Better safety training that involved new equipment or methods might even appeal to the fun-loving element among skydivers and BASE jumpers.