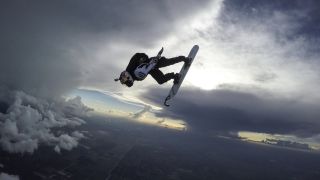 Have you ever thought to yourself, "You know what skydiving needs? More lightning." You probably haven't. But, then again, you aren't Sean MacCormac.

Earlier this month, MacCormac, a member of the Red Bull Air Force's collection of skydivers and pilots, strapped a board to his feet and "surfed" down the edge of a storm cloud over central Florida. The daredevil leapt from a plane flying at an elevation of about 10,500 feet (3,200 meters) and reached speeds of 130 miles per hour (209 km/h) during the thrilling dive.

"It's one of those things that's so wrong," MacCormac told Live Science. "You're like, oh my God, there is nothing that's reasonable about any of this." [See Incredible Photos of McCormac "Surfing' on Storm Clouds]

What may be even more unreasonable is that this wasn't MacCormac's first jump into a thunderstorm. About 25 years ago, while prepping for ESPN's "X Games," he challenged a pilot whom he described as a "war-bird guy" to fly him up to a storm and let him jump. Before this month's stunt, that first storm-surfing feat was an all-time highlight, said MacCormac, who has worked with the FBI and the CIA, and as a stunt man on various movies, including as part of the "barrel of monkeys" scene in the film "Iron Man 3."

That's not to say this recent thunderstorm jump wasn't unique. For one thing, this was MacCormac's first nighttime jump, which, he said, was not originally part of the plan.

The Red Bull team and their partners spent days trying to film the skydiving attempt but they encountered an unusual obstacle: weather that was too good.

The stunt's organizers chose this area of Florida for two reasons: first, because MacCormac thinks that waterlogged geography is beautiful from above; and second, because central Florida can experience a convergence of storm fronts from three directions — the Atlantic Ocean, the Gulf of Mexico and the Florida Keys.

But earlier this month, a dome of high pressure and sinking atmosphere (when air moves downward toward the Earth's surface) prevented widespread thunderstorm development during the scheduled jumps, said Joe Thompson, a meteorologist with Ubimet, a private weather service headquartered in Austria, who was on-site for many of the attempts.

Thompson recalled one fast-developing thunderstorm on the second night the team was in Florida, but it came too late for a jump. "We had to sit there and watch this gorgeous storm that was right there," Thompson told Live Science.

Days passed, and the extreme storm they had prepared to confront didn't come, Thompson said. By his last attempt, MacCormac said the team was doing their best to feign satisfaction. "We were like: 'OK, great…high fives,'" MacCormac said.

Then, just after their last planned jumped, MacCormac said the sky burst with light. The sun had just set but this was their last chance, he added. [8 Craziest Skydives of All Time]

The lightning, although at a safe distance, ignited the clouds around the plane, MacCormac said. "It's kind of like, in a weird way, a crossroads of everything that might have ever terrified a child ever," he said. MacCormac described the experience as intense, scary, unique and spiritual.

Not fun and games

Hunting down a thunderstorm and jumping into it is clearly both challenging and risky. MacCormac said his age (he's 41 years old) and the fact that he now has a family also made this experience different from his storm dives from decades ago.

And as a meteorologist, Thompson said there are more than a few potential issues associated with pulling off such a stunt. "You're dealing with a lot of unpredictability," he said. "There's just no way of knowing exactly how certain things will unfold."

Some of the potential dangers include downdrafts (downward-moving air currents), lightning strikes and updrafts, which can catch someone's parachute and pull them into the storm. While meteorologists can track thunderstorms, most of these conditions cannot be predicted with absolute precision.

But despite the challenges involved, the MacCormac's skydiving feat proved to be an eye-opening and heart-stopping event.

"The weird thing, as a meteorologist, we're used to telling people where storms are going be so they can either take shelter or stay away from them and these guys wanted to go right for them," Thompson said.