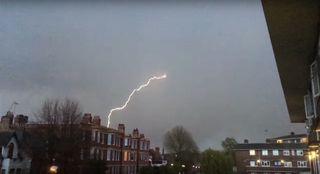 Two passenger-planes got struck by lightning while flying over London last week, and one of the spectacular strikes was caught on video, according to news sources.

A lightning storm on April 27 zapped the two planes, a British Airways airliner and an Icelandair aircraft, according to the BBC. Passengers reported seeing a bright light and hearing a loud bang, but no one was hurt, the BBC reported.

"We see reports occasionally where two or more airplanes are struck by lightning while approaching or taking off from a particular airport during a thunderstorm," Jim Peters, a spokesman with the FAA, told Live Science.

You can watch the slow-motion video of the lightning strike here.

In general, large passenger planes get hit by lightning once every 3,000 to 10,000 flight hours, the FAA told Live Science in an email. That means that a large transport plane will get struck by lightning about once every one to three years if it flies about 3,000 flight hours per year, the FAA said. (Most commercial planes fly about 3,500 hours a year, according to USA Today.)

Airlines report these lightning strikes to the airplane manufacturers, such as Boeing, which help keep track of the strikes.

To passengers, strikes might seem scary, but people on the plane probably won't feel anything out of the ordinary, the FAA said. That's because jets are built to endure lightning bolts. When lightning strikes, a high electrical current flows through the airplane's outer aluminum skin. This metal shell acts like a Faraday cage, keeping the electrical current on the outside of the plane. (A Faraday cage refers to an electrically conductive outer shell, often made of metal, that keeps electric fields from affecting the interior of the structure. That's why it's smart to wear a suit of armor during a lightning storm, according to MinuteEarth.)

"Therefore, the passengers and crew members are not subjected to the high lightning current," the FAA said. "For airplanes constructed using carbon-fiber composite skins and structure, the airplane manufacturer adds metal mesh, foil or screen to the outside surface of the airplane structure, so the lightning current flows through this mesh, foil or screen."

Usually, when lightning strikes, it hits the airplane's nose, wing tips or stabilizer tips. And "these parts of the airplane are protected against lightning damage, so typically the lightning strike will result in minor paint blemishes, small pits on aluminum parts or minor delamination [a term used when composite materials fail] for fiberglass parts," the FAA told Live Science.

Specialists also check onboard maintenance computers to determine whether there were any effects on the airplane electrical systems, the FAA said. [Lightning and Other Weather Threats to Airplanes]

Such was the case with the British Airways plane. "The flight landed safely, and the aircraft was inspected and then cleared for return to service," a British Airways spokesperson told Live Science. "Lightning strikes are fairly common, and aircraft are designed to cope with them."