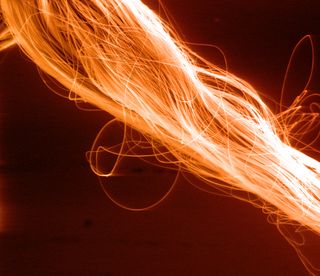 Just because something’s tough doesn’t mean it’s strong. In fact, finding materials that are both tough and strong is one of the biggest obstacles facing those who design everything from bridges to bicycles and bullet-proof vests.

But a new nanofiber from the University of Nebraska-Lincoln (UNL) could be the well-rounded material long sought after by engineers. This structural nanofiber – a type of synthetic polymer related to acrylic – fulfills both the strength and toughness requirements needed for building objects that are simultaneously resilient and light-weight.

In structural materials, strength and toughness are usually mutually exclusive qualities, with strength often occurring at the expense of toughness. Strength refers to a material’s ability to carry a load. A material’s toughness refers to the amount of energy needed to break it.

Take, for example, a ceramic plate. It can carry quite a bit of food to the dinner table, but if you drop it on the way there, it will shatter. Ceramic plates are strong, not tough.

A rubber ball, on the other hand, can easily be squished out of shape, but it’s hard to break. Rubber balls are tough, though not particularly strong.

But the new process discovered by Yuris Dzenis, professor of Mechanical and Materials Engineering at UNL, and his colleagues creates a structural nanomaterial that is both tough and strong.

The technique, known as electrospinning, involves applying high voltage to a polymer solution until a small jet of liquid ejects, resulting in a continuous length of nanofiber.

Dzenis and his team knew that making their material thinner would also make it stronger. However, they were surprised to learn that thinning out the nanofiber also made it tougher.

Dzenis suggested that this added toughness could be a result of the nanofiber’s low crystallinity. Most advanced fibers are high in crystallinity, meaning that they have a very rigid and clearly defined internal structure.

But the new nanofiber is structurally unorganized. Its amorphous regions allow for more slipping in the material’s molecular chains, allowing it to absorb more energy without breaking. This toughness makes the nanofiber a great candidate for use as a building composite.

“If structural materials were tougher, one could make products more lightweight and still be very safe,” said Dzenis.

Airplanes, for example, are made of many composite materials that, if broken, could lead to devastating crashes. To compensate for the composite’s lack of toughness, engineers use more of these materials, making airplanes safer, but also much heavier.

Body armor is another example of a product that could be improved upon with the help of this new advancement in nanotechnology.

“To stop the bullet, you need the material to be able to absorb energy before failure, and that’s what our nanofibers will do,” Dzenis said.

“Whatever is made of composites can benefit from our nanofibers."