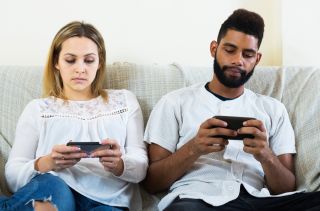 "Hookup culture" isn't all it's cracked up to be.
(Image: © Iakov Filimonov/Shutterstock.com)

Millennials can't catch a break. Not only do their elders repeatedly accuse them of being narcissistic, lazy and entitled, but now a new study pulls the sheet off their sex lives, revealing that there isn't as much going on as you might expect.

Researchers discovered that people born from the 1980s to the early 2000s are not the "hookup generation" that they're frequently made out to be. Millennials (identified in the study as people born between 1980 and 1994) and a group that the researchers called "iGen" (people born between 1995 and 2012) are getting busy far less often during their early 20s than earlier generations did when they were young adults.

In fact, scientists found that despite all the social media platforms, apps and other digital tools for meeting people at the fingertips of today's 20-somethings, they're still having less sex than nearly every generation that preceded them in the past century. [The 10 Most Surprising Sex Statistics]

People are generally assumed to be at their most promiscuous as teens and young adults, the study authors wrote. And casual sex is thought to be even more common today than in the past because of a so-called "hookup culture," which promotes commitment-free liaisons with more partners, made even easier through dating websites and apps like Tinder.

But the researchers found the opposite to be true. In a survey that included more than 26,000 American adults, about 15 percent of the subset of millennials who were ages 20 to 24 reported having no sexual partners since the age of 18, compared with 6 percent of GenXers (people born in the 1960s) when they were ages 20 to 24.

Even as teens, millennials were less sexually active than their predecessors, according to the Youth Risk Behavior Survey, issued by the Centers for Disease Control and Prevention (CDC) in 2016. Between 1991 and 2015, the percentage of high-school students who reported that they were virgins increased from 46 percent to 59 percent, the survey noted.

Some interesting differences emerged when the researchers looked more closely at specific groups within the millennial generation, said study co-author Ryne Sherman, an associate professor of psychology in the Charles E. Schmidt College of Science at Florida Atlantic University.

"Women were more likely to be sexually inactive compared to men, whites more than blacks, those who did not attend college more than those who did, and [those] in the East more than [those] the West," Sherman said in a statement.

What nudged this generation away from sex? It could be a number of factors, the study authors suggested. Conversations about sexual health are more common than in earlier decades, and millennials could be more aware of the dangers of sexually transmitted diseases like HIV, and thereby more cautious in their sexual behavior.

Millennials also tend to be late bloomers in other areas that define "growing up" compared with earlier generations, the authors added. More millennials tend to live with their parents longer, postponing marriage and an autonomous lifestyle.

And Sherman suggested that millennials might be having less sex simply because they're more confident as individuals than young people from earlier generations, and are more comfortable making their own choices and not bowing to peer pressure.

"While attitudes about premarital sex have become more permissive over time, the rise in individualism allows young American adults to have permissive attitudes without feeling the pressure to conform in their own behavior," Sherman said.

The findings were published online today (Aug. 2) in the journal Archives of Sexual Behavior.