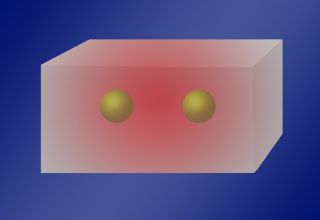 Physicists have found that two or more atoms can absorb a single photon when inside a cavity with standing light waves of a certain frequency (red glow).
(Image: © APS/Joan Tycko)

A single photon can excite two or more atoms at the same time, scientists found. And the light particle would do so in a very counterintuitive way, by summoning one or more companion photons out of nothingness.

If you think of particles of light, or photons, as billiard balls, it makes intuitive sense that a single photon can excite a single atom.

The new, less intuitive finding depends on the strange nature of quantum mechanics, and might help improve advanced machines known as quantum computers, researchers said. Prior work suggested that such machines could simultaneously perform more calculations in one instant than there are atoms in the universe. [Warped Physics: 10 Effects of Faster-than-Light Travel]

This previous research into two-photon absorption and emission led senior study author Salvatore Savasta, a theoretical physicist at the University of Messina in Italy, to wonder if two atoms could together absorb or emit single photons. He and his colleagues developed computer models to figure out whether such events were possible, at least theoretically.

In the models, photons bounced around inside various cavities. Depending on the properties of the particular cavity, specific frequencies of light could make the cavity resonate. This is much like how a violin string held near a piano can vibrate if the frequency of the piano notes matches the resonance frequency of the violin string.

The scientists' findings depended on a few conditions: a cavity should have two atoms within it, and the resonance frequency of that cavity should be twice the frequency of a photon with the ability to boost either of these atoms to a higher-energy state. Under these conditions, two atoms could simultaneously absorb a single photon in the cavity at the same time, the scientists calculated. Each atom would take half of the photon's energy. The same would hold true with three atoms in a cavity that had a resonance frequency three times that of such a photon, and so on.

"I don't remember, but my collaborators say that, when I looked at the smoking gun that one photon can excite two atoms, I suddenly, exultingly, punched the wall," Savasta said.

This simultaneous-excitation effect depends on the bizarre nature of quantum physics, which suggests that a vacuum is not actually completely empty. Rather, it is filled with ghostly "virtual photons" that can fleetingly waver in and out of existence. A cavity, two atoms and a single real photon can essentially borrow a second virtual photon from nothingness, the researchers said.

"What I find most surprising is the opposite process, which we have also described — two spatially separate atoms can jointly and simultaneously decay to a lower-energy state, emitting a single photon," Savasta said. "This is a random simultaneous process. We do not know the exact time when the two atoms will decay — however, they will do [so] simultaneously."

The researchers suggested that this effect could help improve quantum computers. These advanced machines rely on particles that are "entangled." That is, they are linked in such a way that they can influence each other, no matter how far apart they are. Using one photon to excite two atoms simultaneously could naturally give rise to perfect entanglement, Savasta said.

Savasta and his colleagues are now talking with experimental physicists to see if they can experimentally demonstrate their findings.

The scientists detailed their work online July 22 in the journal Physical Review Letters.