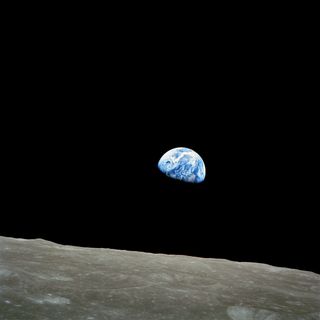 "Earthrise," the first picture taken of planet Earth by people orbiting the moon. This shot was captured by Apollo 8 astronaut Bill Anders on December 24, 1968, as his spacecraft became the first to fly around the moon.
(Image: © NASA)

Astronauts who fly far beyond the Earth are more likely to experience heart problems than spaceflyers whose missions are closer to home — and the cause may be deep-space radiation, a new study finds.

The Apollo missions, which included trips to the moon, are considered "deep-space" missions, meaning the astronauts went beyond Earth's "magnetosphere." This is the region of space around Earth that helps shield the planet from radiation. Therefore, when astronauts fly beyond this shield, they are exposed to higher levels of radiation. [7 Everyday Things That Happen Strangely in Space]

Astronauts on "low Earth orbit" missions, which do not travel beyond the Earth's protective magnetosphere, are not exposed to this radiation, according to the study, published today (July 28) in the journal Scientific Reports.

Scientists "know very little about the effects of deep-space radiation on human health, particularly on the cardiovascular system," Michael Delp, the dean of the College of Human Sciences at Florida State University and the lead author of the study, said in a statement.

The major environmental factor that could cause this difference in heart-disease mortality rates is deep-space radiation, the researchers wrote. This radiation, which comes from cosmic rays originating all over the galaxy, has the potential to damage tissues in the human body, the researchers wrote. (Radiation, even here on Earth, can damage molecules, including DNA.) [10 Amazing Facts About Your Heart]

As part of the study, the researchers also did an experiment on mice to look at how radiation affects blood vessels. In the experiment, the mice were briefly exposed to the type of radiation that the astronauts would have experienced. Results showed that six months later (the equivalent of 20 years within a human life span), the exposure to radiation had damaged the blood vessels of the mice.

In other words, the findings suggest that deep-space radiation could also damage blood vessels, Delp said.

Blood vessel damage can lead to a condition called atherosclerosis, which occurs when solid masses called plaques build up in the body's arteries. When this happens, a person is at risk of heart attack or stroke.