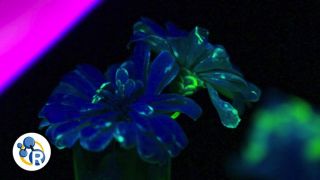 You can create your own glowing flower bouquet with science.
(Image: © The American Chemical Society)

If you're looking for a gift to dazzle a special someone, and regular flowers just don't seem like enough to do the trick, how about creating a beautiful bouquet that can "glow" in the dark?

It turns out, flowers aren't picky when it comes to their water. If you add the ink from a highlighter to water in a vase, flowers will absorb the fluorescent compound in the ink. After a full day, the petals become fluorescent and will glow under a black light. [Bioluminescent: A Glow in the Dark Gallery]

But have you ever wondered why some objects "glow" under a black light? Scientists call this "glow" fluorescence, and the science of the fascinating phenomenon is explored in two new videos from the ACS' "Reactions" series on YouTube.

Between ultraviolet and infrared radiation on the electromagnetic spectrum are the colors visible to the human eye. People can see these colors when light hits an object and the chemical compounds in that object reflect the light.

Some objects absorb light, the video explains, and a select few re-emit the absorbed light at a slightly different wavelength, which gives the human eye access to colors that are normally outside the visible spectrum.

"Fluorescence is generally just an absorption of some piece of the electromagnetic spectrum and then a re-emission of part of that energy at a different wavelength," Tom Kuech, scientific advisor for the new ACS video, told Live Science. "In most cases, in order to see fluorescence, you need to use something like a black light."

Chemicals like the pyranine in a yellow highlighter have structures that absorb light from the UV part of the spectrum and become excited into a higher state of energy. When the extra energy is released, some of it is in the form of visible fluorescence. A black light emits mostly UV radiation, which is why it reveals certain objects' fluorescence.

First discovered in tree bark in the 1560s, fluorescence now has many applications beyond highlighters, including in science, Kuech said. For instance, in biological research, scientists can use fluorescence-infused dyes that will bind to specific areas in a cell, revealing its structure.

"That's kind of the starting point for all kinds of science research, because it's then very easy to identify areas of the cell," Kuech said, "maybe make very beautiful pictures to help communicate what is exactly going on in the cell."

Forensic crime scene investigators also use fluorescence, because many bodily fluids, like saliva, fluoresce, according to the ACS.