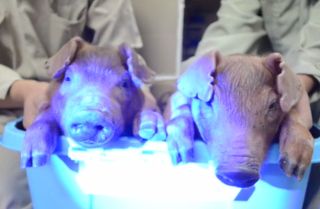 By altering the genes of these piglets, scientists made the animals glow in the dark.
(Image: © University of Hawaii at Manoa, Vimeo)

The pigs' embryos were injected with a molecule from bioluminescent jellyfish that carries instructions to make green fluorescent protein, or GFP. This technique allows researchers to attach harmless glow-in-the-dark tags to specific proteins in animals. The scientists who discovered and developed GFP earned a Nobel Prize in 2008, and researchers have previously created glowing bunnies, frogs and even glow-in-the-dark cats in the name of science.

Study researcher Stefan Moisyadi, a bioscientist from the University of Hawaii at Manoa, explained in a statement that the GFP in the piglets is "marker to show that we can take a gene that was not originally present in the animal and now exists in it." (Video footage of two of the piglets in the dark show that the gene is definitely present.)

The researchers say the ultimate goal of their work is to figure out how to introduce foreign genes into larger animals that could result in more efficient treatments for disease. Led by scientists at the South China Agricultural University, the researchers have submitted their work to the journal Biology of Reproduction.