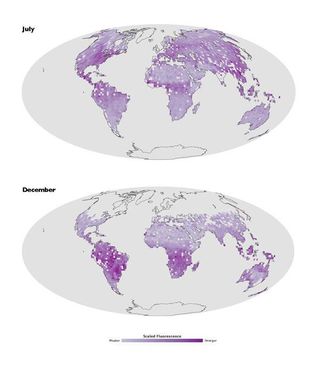 A first-of-a-kind global map of land plant fluorescence shows stronger photosynthetic activity in the Northern Hemisphere in July when light and temperature conditions were most conducive to plant growth, and the reverse in December. The maps are based on data from a spectrometer aboard the Japanese satellite GOSAT.
(Image: © NASA's Earth Observatory)

The trees, shrubs and other plants that cover large swaths of Earth's land area emit a difficult-to-detect reddish glow as a by-product of the photosynthesis process that they use to fuel themselves.

This light, which is called fluorescence and is undetectable with the human eye, has previously been mapped for ocean-dwelling plants, but a new global map created by satellite observations is a first for land plants.

Having these maps is helpful to scientists because it helps them gauge the health of the world's vegetation .

To date, most satellite-derived information related to the health of vegetation has come from "greenness" indicators based on reflected rather than fluorescent light. Greenness typically decreases in the wake of droughts, frosts, or other events that limit photosynthesis and cause green leaves to die and change color.

However, there is a lag between what happens on the ground and what satellites can detect. It can take days --- even weeks -- before changes in greenness are apparent to satellites.

Chlorophyll fluorescence offers a more direct window into the inner workings of the photosynthetic machinery of plants from space. "With chlorophyll fluorescence, we should be able to tell immediately if plants are under environmental stress -- before outward signs of browning or yellowing of leaves become visible," said Elizabeth Middleton, a NASA Goddard-based biologist and a member of the team that created the maps.

The new maps, based on data collected in 2009 from a spectrometer aboard a Japanese satellite called the Greenhouse Gases Observing Satellite (GOSAT), show sharp contrasts in plant fluorescence between seasons. In the Northern Hemisphere, for example, fluorescence production peaked during July, while in the Southern Hemisphere it did in December (austral summer).

The new findings help confirm previous lab and field experiments that suggest chlorophyll fluorescence should taper off in the fall as the abundance of green foliage declines and stress increases as a result of lower temperatures and less favorable light conditions.

In the future, the Goddard team expects that fluorescence measurements will complement existing measures of "greenness in a variety of ways. They could help farmers respond to extreme weather or make it easier for aid workers to detect and respond to famines. Fluorescence could also lead to breakthroughs in scientists' understanding of how carbon cycles through ecosystems one of the key areas of uncertainty in climate science.