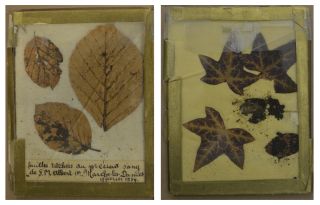 DNA has confirmed that the blood staining these tree leaves, bought at an auction, came from King Albert I.
(Image: © copyright KU Leuven - Maarten Larmuseau)

Using DNA tests, scientists have confirmed the authenticity of a morbid souvenir: bloodstained leaves that were taken from the death site of Belgium's King Albert I more than 80 years ago.

The results of the new study might help put to bed some conspiracy theories that claim Albert was the victim of murder, not a climbing accident.

Albert, who ruled from 1909 until his death, was celebrated for his role in World War I, as he refused to let German troops through Belgium to attack France. An avid mountaineer, he died on Feb. 17, 1934, when he was climbing alone near the village of Marche-les-Dames, southeast of Brussels. His body was found on a rock at the foot of a cliff. [Photos: Squash Contains Louis XVI's Blood]

The king's death, at age 58, came as a shock for the public. People flocked to Marche-les-Dames to pay their respects —and to take part in the spectacle, according to news reports. An Associated Press report from Feb. 26, 1934, said the rock where Albert fell to his death had to be surrounded by barbed wire to protect it from "the depredations of thousands of curious visitors." The site had become such an attraction that it was being "plucked bare of stones, leaves, branches and everything else removable by souvenir hunters."

A journalist bought one of those supposed relics, a set of bloodstained tree leaves, at auction in 2013. That journalist then teamed up with scientists for an investigation. The researchers were able to find two of Albert's living relatives who agreed to help confirm the authenticity of the bloody leaves: King Simeon II, the last tsar and former prime minister of Bulgaria, and a German baroness named Anna Maria Freifrau von Haxthausen.

"They gave up DNA samples that we compared with the DNA of the trails of blood," the leader of the study, forensic geneticist Maarten Larmuseau of the University of Leuven in Belgium, said in a statement. "We found that the blood is indeed that of Albert I."

Rumors had cropped up about the circumstances surrounding King Albert's death, suggesting that the king had committed suicide or was the victim of a politically motivated murder.

Even some public figures advanced these conspiracy theories: among them, British military officer Graham Seton Hutchison, an avowed fascist who came to sympathize with the Germans after World War I and to praise Adolf Hitler. Seton Hutchison, as quoted by The New York Times in May of 1934, claimed the story of Albert's death was "the biggest piece of spoof put over on the world," implying that the king was murdered because he actually wanted no part in the "devilry of France in conspiring for war against the defenseless Germans."

Since there were no eyewitnesses to the king's death, many of the conspiracy theories hinged on the idea that Albert's body was never even at Marche-les-Dames, or that someone placed the body there after the king was killed by a blow to the head. So the positive identification of blood on leaves from the site helps add credence to the official account of Albert's death.

"Eighty years after the fact, everyone involved has passed away, and most material is gone. We will probably never be able to dismiss all speculations concerning this 'cold case,'"Larmuseau said in the statement. "The story that the dead body of the king has never been in Marche-les-Dames or was only placed there at night has now become very improbable. Furthermore, the results show that conducting a perfect legal investigation at the time was impossible right from the start, because souvenir hunters had disturbed the scene."

The researchers said they wanted to protect the privacy of everyone involved in the study. Therefore, they had independent experts check the genetic profiles, but did not publish any of that sensitive personal DNA information.

Strangely enough, this isn't the first time DNA tests have confirmed a death relic of a monarch. Three years ago, scientists found that a decorative gourd really did contain the dried blood of France's King Louis XVI.

The new findings will be published in the journal Forensic Science International: Genetics.