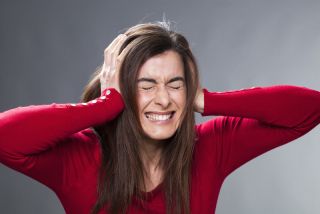 About one in 10 American adults has a persistent ringing or roaring in the ears or head, a condition called chronic tinnitus, a new study suggests.

The study also found that the rates of tinnitus are higher among Americans who are regularly exposed to noisy environments, either at work or during their free time. The findings were published today (July 21) in the journal JAMA Otolaryngology-Head & Neck Surgery.

The analysis showed that approximately 10 percent of people in the U.S. ages 18 and older had experienced ringing or the sensation of noise — such as roaring, buzzing, beating, whooshing or whistling — in their ears or head in the past 12 months.

But the study's estimated prevalence of tinnitus may be on the low side because "other similar studies have reported even higher rates of tinnitus," said lead author Dr. Harrison Lin, an ear, nose and throat specialist at the University of California, Irvine. Those studies have found that 8 to 25.3 percent of people in the U.S. have tinnitus. [5 Surprising Facts About Pain]

An episode of tinnitus can not only be annoying but also wreak havoc on a person's quality of life by interfering with thought processing, emotions, hearing, sleep and concentration, the researchers said.

To estimate the number of people affected by tinnitus, the researchers analyzed data collected as part of the 2007 Integrated Health Interview Series, a project meant to supplement the information gathered from the Centers for Disease Control and Prevention's yearly National Health Interview Survey. The only year in which a question about symptoms of tinnitus has been included in the survey was 2007.

People who reported that they had these symptoms were then asked additional questions about the symptoms' frequency, duration and severity, as well as whether they told their doctors about the problem and any treatments they may have tried in an attempt to relieve their symptoms.

People who were regularly exposed to loud noise at their workplace or in their personal pursuits — such as attending concerts, riding motorcycles or using workshop tools — had higher rates of tinnitus, according to the findings.

In addition, nearly 40 percent of the adults surveyed who experienced tinnitus said they tended to notice the problem at bedtime. The quiet of bedtime may bring the sound of tinnitus to the forefront of someone's attention, which can lead to anxiety, insomnia and aggravation, Lin told Live Science. [7 Strange Facts About Insomnia]

Some possible remedies for tinnitus at bedtime include using a white-noise machine (a device that can play nature sounds, such as a waterfall, ocean waves or birds) or even turning on a fan. Taking one of these steps can help to push the perception of tinnitus to the background so that a person can relax and fall asleep, Lin noted.

The data also revealed that only half of the people affected by tinnitus had discussed it with their doctor, and most people (85 percent) had never tried any treatment for it.

Because tinnitus is such a common problem, the American Academy of Otolaryngology-Head and Neck Surgery Foundation released its first set of treatment guidelines in 2014 to help doctors treat their patients.

Based on these guidelines, there are two treatments that doctors should recommended to people with persistent, bothersome tinnitus, Lin said.

One is the routine use of hearing aids because the large majority of people with chronic tinnitus have some degree of hearing loss, Lin said. A hearing aid will not only alleviate the hearing impairment but also may improve tinnitus symptoms, he noted.

The second recommended treatment is cognitive behavioral therapy (CBT), a form of psychotherapy that research has shown can improve a person's tolerance of persistent tinnitus, Lin said. CBT can convert negative or destructive trains of thought associated with tinnitus into more positive and constructive emotions, he said.

Whether tinnitus is a frequent annoyance or an occasional complaint, people who have it should make every effort to minimize their exposures to loud noises at work and at home to optimize their ear health and hearing, Lin suggested. People who are regularly bothered by it should obtain a hearing test from an audiologist and then seek further care from an ear, nose and throat specialist, he advised.