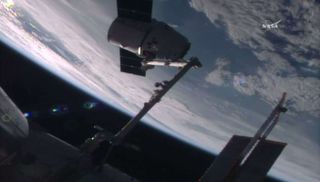 A robotic arm at the International Space Station captures an unmanned Dragon space capsule as it delivered supplies, including a DNA sequencer, to the outpost's crew on July 20, 2016.
(Image: © NASA TV)

A DNA sequencer that was just delivered to the International Space Station can test not just known Earthly organisms. Turns out, the little device may also be able to analyze samples taken from alien life, NASA said.

The SpaceX Dragon capsule met up with the International Space Station (ISS) early yesterday morning (July 20), after being launched aboard the Falcon 9 rocket on July 18. Among the goods delivered was the MinION — a palm-sized sequencer with a lot of promise that weighs just 120 grams (0.27 pounds).

"This one piece of equipment might do a lot for us, in terms of exploration, research and crew health-related issues," said Sarah Wallace, a NASA microbiologist and member of the team working on the MinION experiment, in a recent conversation with Live Science.

There are quite a few special features of the MinION — pronounced with emphasis on the "ion," not like the little yellow creatures from "Despicable Me." One that stands out: its ability to examine alien life-forms. [Greetings, Earthlings! 8 Ways Aliens Could Contact Us]

According to a NASA statement, others sequencers that are being considered for use in space will only test for known and targeted organisms. The MinION, on the other hand, will provide analysis of an entire sample, such as all microorganisms in that sample or a full genome. It has very small pores, called nanopores, that allow ions (electrically charged particles) to pass through, creating a current. If other molecules, such as DNA, pass through these channels, they reduce this current in particular ways. The reduction in current is then analyzed and can reveal the sequence of the sample.

"It doesn't actually have to just be DNA that could pass through that pore," Aaron Burton, space scientist and lead on this experiment, told Live Science. "All you really need is a polymer that will block the pore going through it." This means that it may have the ability to detect alien life that is similar but not quite the same as our own.

Burton explained that experts generally believe that, if there is life on Mars, it probably shares some basic features with our own. Mars had water, it used to have more of an atmosphere and our worlds have traded meteors. This means that, whatever life-forms each planet has, those organisms are likely to have a common ancestor. Mars may not have DNA-based life, but, if it has something close, MinION might be the best bet at finding it.

Even now, researchers at several institutions are experimenting with a faux-DNA material, dubbed XNA (xeno nucleic acid). This is a synthetic version of DNA that uses the same bases as DNA (adenine, cytosine, guanine and thymine) but has them attached to sugars that are different from the ones we see in DNA.

Beyond searching for alien life, the MinION will also be used to evaluate the ISS environment and crew. As much as NASA tries to make sure everything is spic-and-span before sending a delivery to the station, microbes are inevitable. [Infographic: The International Space Station: Inside and Out]

"We try to put things up there as microbially clean as possible, but we don't sterilize the crew, of course," said Wallace. "So, they take their microbiome and that becomes the ISS microbiome." Her lab already does quarterly microbial monitoring of the surfaces and air of the ISS. The water is sampled once a month because it's made of recycled urine and condensate, which includes sweat and exhaled breath. This recycling process increases the likelihood that the crew could ingest potential pathogens.

In the past, they've found the kinds of microbes that are expected around humans, including Staphylococcus aureus, Pseudomonas, Streptococcus and Klebsiella. Wallace also mentioned that a cloth-like wall in the Russian section of the ISS once grew green and fuzzy from astronauts bungee-ing their wet towels to it in order to dry. To battle grime or illness on the ISS, NASA supplies and resupplies a wide variety of antibiotics, disinfectants and biocides; but the best method of attack isn't known until a sample of the problem-causing microbe is analyzed.

Currently, all of the samples taken from the environment and the occupants of the ISS have to be stored and then sent back to Earth for sequencing. The hope is that MinION will allow these samples to the sequenced in real time. This will eliminate the need for long-term storage of samples, which Burton said would be implausible for an extended mission, such as a proposed 500-day journey to Mars. Being able to sequence samples immediately to identify causes of disease or uncleanliness will also provide NASA with valuable information about the kinds of microbes these future missions should anticipate. With the limited space that comes with extended missions as well as the necessary supplies required for such journeys, everything that’s brought along needs to have a purpose.

No adjustments were made to the MinION for use in zero gravity, but Wallace said they did optimize the protocols for use in order to cut down on the time the crew would need to spend on this work. The lack of modifications to MinION means that even the simplest of lessons learned during this experiment can have effects that go beyond the space program. "If we can make something work on the ISS, in microgravity, then, any changes or advances we have to make to work it there have benefits on Earth as well," said Burton.

Lessons learned in space may also translate into knowledge for other "low-resource" environments, where resources are limited. Researchers have already used the MinION in Liberia for rapid sequencing of Ebola.