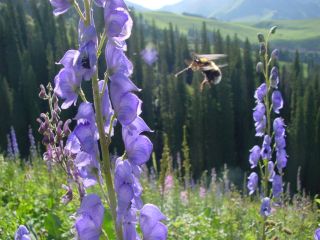 Birds aren't the only animals that can soar to exceptional heights. Insects can also rise to the occasion, reaching astounding altitudes, scientists have found.

While the highest-flying bird, the Rüppell's griffon vulture, native to Central Africa, has been reported at an altitude of 37,000 feet (11,278 meters), insects can also propel themselves significantly higher than you might think.

Scientists have collected locusts flying at heights of 14,764 feet (4,500 m); true bugs, stoneflies, mayflies, and caddisflies at altitudes over 16,404 feet (5,000 m); and flies and butterflies over 19,685 feet (6,000 m), according to Michael Dillon, a researcher with the Department of Zoology and Physiology at the University of Wyoming. [Gallery of Colorful Wings]

"Small insects can't regulate body temperature independent of their surroundings," Dillon explained. "Cold temperatures at high altitudes may shut them down for large parts of the day and night. And insects — like us — rely in large part on aerobic respiration to supply energy demands. This means they have to supply enough oxygen to their tissues to function. Reduced oxygen at high altitudes may challenge their ability to respire," Dillon said.

And when air density is low, insects' wings need to work a lot harder to generate lift.

"There are fewer molecules for the wings to "push" against to generate forces that keep the body aloft and moving," he added.

Dillon co-authored a 2014 study published in the journal Biology Letters describing the unusual flight capabilities of alpine bumblebees. By placing bees in a chamber that simulated the reduced air pressure at high altitudes, the researchers found that some bumblebees could hover under conditions approximating an altitude of 29,528 feet (9,000 m) — higher than Mount Everest.

The scientists used high-speed cameras to capture the bumblebees in flight, discovering what enabled the insects to hover where air is thinner.

"We were able to show how they change the motions of their wings to compensate for reduced air density — they swing them through a wider arc," Dillon told Live Science. However, the much lower temperatures at altitudes higher than Mount Everest would likely prevent the bees from flying to those heights, the researchers wrote in the study.

There is still much about insect physiology that is yet to be learned, Dillon added. So it is difficult to say what additional adaptations bumblebees and other insects may have that allow them to survive at high elevations and fly to extreme heights, he said.

"Because of the challenges of living at high altitude, we see reductions in abundance and diversity of most organisms — insects included — as we move to high elevations ... just a tough place to make a living!" Dillon said.