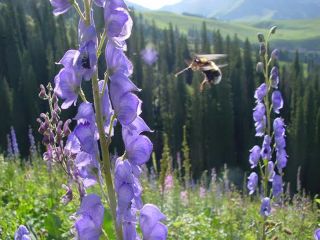 A bumblebee approaching a flower at 6,500 feet (2,000 meters) in northwest China. New research suggests some bumblebee species are capable of flying at much higher elevations.
(Image: © M.E. Dillon)

Alpine bumblebees have the ability to fly at elevations greater than Mt. Everest, scientists have found.

Bumblebees cannot survive the freezing conditions of Mt. Everest's peak. But researchers based at the University of California, Berkley simulated the low oxygen and low air density conditions of such high elevations to determine the limits of the bumblebee's flight capacity, and found the bees were capable of staying afloat at remarkably inhospitable elevations.

The team traveled to a mountain range in western China and collected six male bumblebees of the species Bombus impetuosus at about 10,660 feet (3,250 meters). The species is considered alpine, because it lives at alpine elevations, but it doesn't differ very much from similar species that live closer to sea level. [Photos: Gallery of Colorful Insect Wings]

The researchers placed the bees in clear, sealed boxes and experimentally adjusted the oxygen levels and air density using a hand pump to simulate increasing elevation, while keeping temperature constant.

The team used a video camera to study how wing beat patterns changed to compensate for the thinner air and lower oxygen concentrations of high elevations, hypothesizing that the bees would either need to beat their wings faster or swoop them wider to keep their bodies afloat. The researchers found that, instead of beating their wings faster, the bees increased the angle at which they extended their wings with each beat, reaching closer to their heads and abdomens each time. This action increased the amount of air that they swooped, helping to boost their bodies up.

The findings suggest that bumblebees are not limited by flying capacity when searching for places to settle their colonies, but rather by something else, such as the availability of the flower nectar they feed on, study lead author Michael Dillon, who now works at the University of Wyoming, told Live Science. This could bode well for alpine bumblebees in the future, Dillon said, as climate change may force animals up to higher elevations than they once inhabited due to warming conditions at lower elevations.

"It is important given a lot of recent literature suggesting that many insects are moving up mountains in response to changing climates," Dillon said. "In the case of the bumblebees, they are not going to have much trouble with changes in oxygen."

The team is currently following up their study to determine whether bees living at lower base elevations are also capable of flying at simulated high elevations, or if this is an adaptation particular to alpine bumblebees.