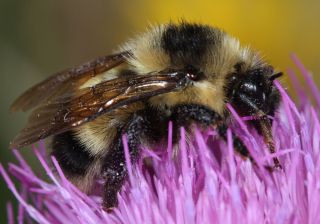 An elusive bumblebee, which was last seen in 1956, was recently found living in the White Mountains of south-central New Mexico, scientists announced Monday (Dec. 5).

Known as "Cockerell's bumblebee," the bee was first described in 1913 using six specimens collected along the Rio Ruidoso, a river located in the Sierra Blanca and Sacramento Mountains, N.M. Over the years, one more sample was found in Ruidoso, and 16 specimens were collected near the town of Cloudcroft, N.M.

The last Cockerell's bumblebee sample was collected in 1956. No other specimens had been recorded until Aug. 31, when a team of scientists from the University of California, Riverside, found three more samples of the bee species in weeds along a highway north of Cloudcroft.

"When an insect species is very rare, or highly localized, it can fairly easily escape detection for very long periods of time," Douglas Yanega, a senior museum scientist at the University of California, Riverside (UCR), said in a statement.

Cockerell's bumblebee has the most limited range of any bumblebee species in the world, having been spotted only in an area of less than 300 square miles (777 square kilometers), according to the researchers. By comparison, the rare "Franklin's bumblebee" species, which was last seen in 2003 and is on the verge of extinction, is known from a distribution covering about 13,000 square miles (33,670 square km).

Cockerell's bumblebee was able to fly under the radar for so long because the area where the species lives is rarely visited by entomologists, Yanega said. The bee species has also "long been ignored because it was thought that it was not actually a genuine species, but only a regional color variant of another well-known species," Yanega explained.

An assessment of the genetic makeup of the three newly discovered specimens gives fairly conclusive evidence that Cockerell's bumblebee is a genuine species, the researchers said.

It is not unusual for an insect species to be rediscovered after several decades, when people might otherwise have believed it had gone extinct, Yanega said. UCR entomologists rediscover many "lost" insect species like the Cockerell's bumblebee, as well as discover entirely new species, at the rate of several dozen species every year.

"There are many precedents – some of them very recently in the news, in fact – of insects that have been unseen for anywhere from 70 to more-than-100 years, suddenly turning up again when someone either got lucky enough, or persistent enough, to cross paths with them again," Yanega said. "It is much harder to give conclusive evidence that an insect species has gone extinct than for something like a bird or mammal or plant."

Cockerell's bumblebee does not appear to be facing extinction. The bumblebee dwells in an area that's largely composed of National Forest and Apache tribal land, it is "unlikely to be under serious threat of habitat loss at the moment," Yanega said.

However, the researcher notes that since the bee species' biology is completely unknown, it may require additional formal assessments in the future.