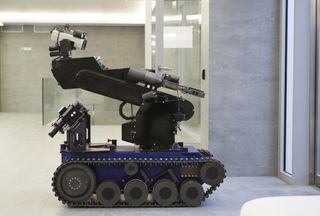 A suspect in yesterday's (July 7) Dallas shooting — during which five police officers were killed and seven officers were injured — died after police deployed a remote-controlled bomb-disposal robot carrying an explosive device.

Dallas Police Chief David Brown explained during a press conference that police sent the robot in after negotiations with the suspect broke down and he exchanged gunfire with officers.

"We saw no other option but to use our bomb robot and place a device on its extension for it to detonate where the suspect was," Brown told reporters, adding that police confirmed shortly after the explosion that the suspect had died. [5 Surprising Ways Drones Could Be Used in the Future]

The police considered other options for subduing the suspect, Brown said, but those would have required placing officers "in grave danger."

Robots that are capable of handling or disarming explosives have become a more common sight in police departments in recent years, due to a Defense Department initiative known as the 1033 Program, which redistributes surplus military equipment. Approximately 200 law enforcement agencies — federal, state and local — across the U.S. have at least one so-called "bomb robot" provided by the 1033 Program, according to a 2015 report published by the Center for the Study of the Drone at Bard College.

While the U.S. military has used drones internationally as remote bombers, this could be the first instance of a U.S. police force's robot killing a suspect, said Peter W. Singer, a political scientist and strategist for New America, a non-partisan think tank addressing public policy issues.

Singer said in a tweet that he had heard of U.S. troops in Iraq using robots in a manner similar to the Dallas situation — modified to deliver explosives. While conducting an interview for his book "Wired for War: The Robotics Revolution and Conflict in the 21st Century" (Penguin Books, 2009), he learned of an incident in which soldiers duct-taped an anti-personnel mine to a type of surveillance robot called a MARCBot, sending the machine into an alley after an insurgent.

Singer added that this happened in an unusual circumstance, "just troops working up a solution on the fly" to lessen the risk, he said.

Robots in law enforcement are most commonly associated with bomb disposal, but police have also used the devices to respond to situations deemed too dangerous for people.

In 2012, police in Greensboro, North Carolina, used a robot equipped with an audio and video link to communicate with an armed suspect. The man had barricaded himself inside a house after firing shots at the officers. Police later subdued the man and took him into custody, Police: The Law Enforcement Magazine reported.

Officers in Richland County, Ohio, used a robot to monitor the position of a robbery suspect during a 9-hour standoff in 2014. They later used the robot to spray the suspect with tear gas, allowing officers to safely enter the building.

And during a 2015 standoff in San Jose, California, police used a bomb-disposal robot to deliver a phone — and a pizza — to a man threatening suicide on a freeway overpass, reported IEEE Spectrum.

On Friday morning (July 8), a law enforcement source identified the suspect in the Dallas shooting as Micah Xavier Johnson of Mesquite, Texas, according to a report by CBS local news in Dallas/Fort Worth. Brown said in a statement that during negotiations with police, Johnson affirmed he was not affiliated with any organization and that he acted alone.