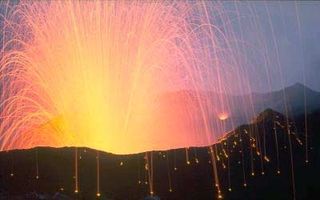 When supervolcanoes blow their tops, the world's climate is altered and life is snuffed out regionally and challenged globally. Such an event is thought to have occurred 74,000 years ago when the Toba supervolcano erupted in what is now Sumatra with a force estimated to be 1,000 to 10,000 times that of Mount St. Helens.

The timing of Toba's tempest fits with an interesting bottleneck known to exist in human evolution, as seen in DNA evidence. The population became very small sometime between 90,000 and 60,000 years ago. And a new idea floating around suggests that the eruption may have contributed — by necessity — to our supreme intelligence today. Further, it has been suggested, we may be undergoing the next great leap in smarts right now.

More on all that lower down. First, some fresh research on the eruption:

Scientists have theorized that Toba triggered plunging global temperatures that caused ice sheets to grow for a thousand years and led to a mass die-off of plants and animals. Perhaps only a few thousand early humans survived, the thinking goes, and that's why all human DNA today is so remarkably similar — though we branched off from other primates millions of years ago, we all come from the same few folks who survived Toba, and we've had only 74,000 years to evolve, an eyeblink in the grand billions-year scheme of evolution.

Neat idea, but climate model simulations of the eruption have been unable to produce the glaciation to the satisfaction of all those who study this stuff, and there are no climate observations to adequately support the volcanic winter.

A new study offers another mechanism to explain the great human bottleneck.

Alan Robock and Georgiy Stenchikov at Rutgers University and colleagues ran six climate model simulations to include Toba-induced changes in sunlight, plant life and chemical changes in the atmosphere that might all affect how long a global volcanic cloud could last and what would happen.

They assumed a wide range of outputs from 33 to 900 times what Mount Pinatubo spat into the air in 1991 in an event that lowered global temperatures slightly for two year.

None of the models initiated glaciation. But they did produce a decade of severe volcanic winter, which would likely have had devastating consequences for humanity and global ecosystems, the researchers write in the latest issue of the Journal of Geophysical Research-Atmospheres.

"The 'volcanic winter' following a supervolcano eruption of the size of Toba today would have devastating consequences for humanity and global ecosystems," they write. "These simulations support the theory that the Toba eruption indeed may have contributed to a genetic bottleneck."

All this has interesting implication for our future.

It's not known when the next supervolcano will blow. But it is presumed one will. Experts estimate such events occur every 50,000 to 100,000 years (and an incoming asteroid or comet could do the trick, too).

One of the biggest lurking disasters is at Yellowstone National Park, where a supervolcano erupted 620,000 years ago. It will erupt again, scientists predict, and it could cover half the United States with ash up to 3 feet (1 meter) deep.

What's really interesting to ponder is the idea that the next great catastrophe won't just challenge our existence, but it could make us smarter.

After a disaster like Toba, early humans would have been forced to break generations-long habits and get creative to find food. Neurophysiologist William Calvin argues that our bright minds — enabling language use and the ability to plan ahead — evolved in response to such catastrophes.

In The Atlantic this month, Jamais Cascio of the Institute for the Future uses Calvin's idea as a springboard to propose that current challenges, from global warming to food and fuel shortages, will force us to evolve further.

"But this time we don’t have to rely on natural evolution to make us smart enough to survive," Cascio writes. "We can do it ourselves, right now, by harnessing technology and pharmacology to boost our intelligence."

In fact, he says, it's already happening. Our collective ability to gather, store and build upon knowledge — call it Google et al. — is creating You+, Cascio reasons. What we need now are better tools to analyze the information we have, he notes, and then we can move on to that higher primate we're bound to become.

Heady stuff. And if we're lucky, Toba and Yellowstone will hold off until we're smart enough to figure out how to deal with them.