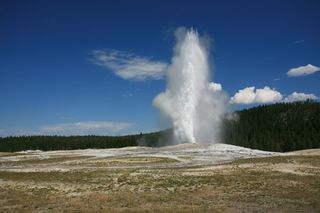 A swarm of small earthquakes in Yellowstone National Park is the most intense measured there in years, leaving scientists puzzled.

The region is known for such swarms — 1,000 to 2,000 quakes occur annually in the park. Yellowstone's 10,000 geysers and hot springs, including the Old Faithful Geyser, may be the result of this geologic activity.

But the latest shaking is notable for the number of tiny temblors and their intensity, according to a statement yesterday from the University of Utah, where scientists monitor seismic activity in Yellowstone. (Yellowstone is located mostly in the northwest corner of Wyoming.)

The largest of the earthquakes was a magnitude 3.9 at 10:15 pm MST on Dec. 27, a day after the swarm began. The sequence has included nine events of magnitude 3 to 3.9 and approximately 24 of magnitude 2 to 3 at the time of this release. A total of more than 250 events large enough to be located have occurred in this swarm.

"Scientists cannot identify any causative fault or other feature without further analysis," according to the statement.

Most of these temblors would not be felt by humans. Earthquakes generally have to exceed magnitude 4.0 to cause light damage.

Scientists wonder if the shaking might presage a larger event. This month's swarm is the most intense in this area for some years, scientists said. It is centered on the east side of the Yellowstone caldera, a giant basin created in a colossal eruption some 620,000 years ago.

Researchers have long predicted that the Yellowstone supervolcano will eventually erupt again, with devastating consequences for much of the United States. Half the country could be covered in ash up to 3 feet (1 meter) deep, one study predicts. But those same researchers say nothing suggests such an eruption is imminent. They point out, however, that Yellowstone seems to blow its top about every 600,000 years.

Meanwhile, the region's deep secrets are still being revealed.

Last year researchers reported on unusual slow movement below the surface that's tied to a newfound gradual sinking of the nearby Teton Range. And in 2006, scientists discovered that in the previous decade, the volcano had risen nearly 5 inches.

"Could it develop into a bigger fault or something related to hydrothermal activity?" wonders Robert Smith, a professor of geophysics at the University of Utah. "We don't know," he said this week.

Smith and his colleagues said they'll continue to monitor the activity.