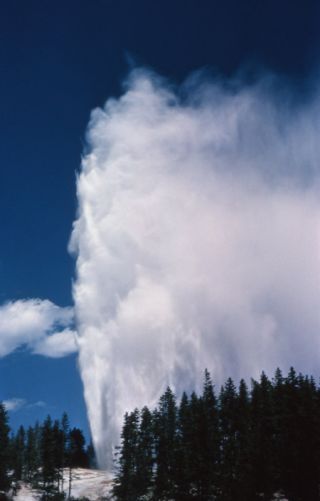 Forces brewing deep beneath Yellowstone National Park could be making one of the largest volcanoes on Earth even bigger, a new study reveals.

In the past decade, part of the volcano has risen nearly five inches, most likely due to a backup of flowing molten rock miles below the planet's crust.

While the rise may not be noticeable to the casual hiker, the activity may have cracked the crust in the park's famous Norris Geyser Basin (NGB), leading to the formation of new fumaroles—holes that vent smoke and gas—and the reawakening of some of the area's geysers, including Steamboat, the largest geyser in the world.

Yellowstone last erupted about 640,000 years ago, spewing 240 cubic miles of material. Despite the newly discovered activity, researchers don't expect it to erupt any time soon. Eventually, however, it could explode again as a super-volcano that would destroy life for hundreds of miles around and coat the entire country in ash.

Radar observations from the European Space Agency's ERS-2 satellite reveal that the jellybean-shaped Yellowstone caldera—a giant depression caused by past volcanic explosions—began to rise in 1995.

Although the caldera floor started to sink in late 1997, part of the north rim, called the north rim uplift anomaly (NUA) continued rising until 2003.

Molten rock called magma rises from the Earth's core under Sour Creek dome, a major feature in the eastern section of the caldera. When the magma reaches the mantle layer, six to 12 miles below the surface, it spreads like a pancake before branching off into several tunnels.

Magma flow is controlled by natural valves—one at Sour Creek dome that lets magma enter the system, and others that allow it to flow out. The outflow valve below the north rim uplift anomaly, however, can only pass so much magma at once.

"Magma's always coming up in Sour Creek dome and going through the system," USGS research geophysicist Charles Wicks told LiveScience. "But maybe there are pulses when more comes up. That may be what causes the surface to rise."

The research is detailed in the March 2 issue of the journal Nature.

The pulses might be more than the outflow valve can handle—like trying to squeeze all the toothpaste out of the tube at once. As the molten material pushes out on the surrounding rock, the ground around the valve expands and cracks.

This could explain why the uplift anomaly has risen and the Norris Geyser Basin has become more active, Wicks said. Another explanation is that nearby geothermic changes and seismic activity altered the shape of the valve, perhaps narrowing it. However, previous studies have indicated that no such alterations have occurred, and that changes in flow rate more likely cause these deformations.

The five-inch increase at the uplift anomaly probably wasn't noticed by many tourists, but the changes in the Norris Geyser Basin were easily spotted by some. After a nine year period of inactivity, Steamboat Geyser erupted in May, 2000, and has erupted five times since. Reaching more than 300 feet in the air, Steamboat produces the highest plumes of any geyser in the world.

Since 1989, Pork Chop geyser was active only as a hot spring, but in the summer of 2003 it reawakened as a geyser. Also that summer, several footpaths near the Norris Geyser Basin were closed because of near-boiling ground temperatures.

And a 250-foot line of new fumaroles, holes venting hot smoke and gases, formed near Nymph Lake to the north of the uplift anomaly.

"But when the [uplift anomaly] quit inflating in 2002 and 2003, the thermal unrest died off too," Wicks said. "So we think there's pretty good evidence for tying these events together."

Despite these changes, Wicks doesn't believe that Yellowstone is ready to erupt.

"This is probably an ongoing feature in Yellowstone. We've only been able to study it like this for 10 years, so we're still not sure what's normal and what's not," Wicks said. "But there's no evidence yet to suspect an eruption."

Also, the magma pancake serves as a thermal buffer that helps stabilize the volcanic system against potentially dangerous sudden changes in temperature.