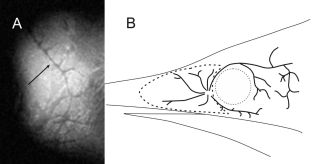 A swordfish's impressive saber-like bill might inspire visions of swashbuckling fencers wielding flashing blades. But in reality, this protruding proboscis is more vulnerable than you might expect.

There is a weak spot at the base of the bill where it joins the skull. The bone thins at this spot to make room for an oversized gland. Scientists have just discovered what this mysterious gland might be used for — faster swimming.

Researchers have found that the gland produces oil that covers the swordfish's head with a slippery coating. By generating this greasy film, the gland could reduce drag and help the fish cut through the water more efficiently, contributing to its swim speed. [See Photos of the Freakiest-Looking Fish]

Swordfish have powerful yet streamlined bodies that are literally built for speed. They are thought to be the fastest swimmers on Earth and have been clocked at an estimated 62 mph (100 km/h), according to the study authors.

A swordfish uses its signature bill — which can reach up to 40 to 45 percent of its body length — in sweeping motions to slash and stun its prey. But it also plays a part in swimming. The bill's surface is porous and rough, the authors noted — a feature that previous studies had linked to drag reduction.

However, recent studies had also revealed a noticeable weakness at the bill's base that puzzled the scientists, prompting them to take a closer look.

Luckily, the study's lead author, John Videler, a biologist and professor at Groningen University in the Netherlands, had scanned a pair of adult swordfish in 1996 and 1997 using magnetic resonance imaging (MRI). He captured 657 images showing the insides of the fish, from the tips of their bills to the ends of their tails.

He and his colleagues recently revisited those scans to see if they could explain the weak area in the swordfish bill, and they quickly identified a large gland at the spot where the bill joined the skull.

Initially, the researchers suspected that the gland — which is located directly under the fish's nasal sacs — might play a part in the animal's olfactory system, but they couldn't establish a link.

It was "a case of pure serendipity," Videler said, when study co-author and marine biologist Roelant Snoek detected a network of capillaries in the skin that were connected to the gland, which carried the oil it produced to the skin's surface.

Snoek's so-called "light-bulb moment" involved an actual light bulb — he accidentally dropped a light onto the fish that he and Videler were dissecting, illuminating those capillaries that were connected to the gland, Videler explained in a statement.

The researchers injected the capillaries with ink to confirm their connection to pores on the skin's surface, and found that clusters of pores of varying sizes covered a significant portion of the head. During another test, they warmed the gland with a hair dryer to stimulate oil flow though the pores — and it began to flow "as soon as the oil gland was heated." In a living swordfish, the oil gland would be heated by muscles near the eyes, according to the scientists.

Oil-slick skin would be more water-resistant. In combination with the bill's texture, a greasy head could reduce drag in the water by about 20 percent, the authors estimated in the study. They suggested that future investigations could test the hypothesis by creating mathematical models of the swimming performance of swordfish, which is virtually impossible to monitor in the wild.

But perhaps the most important lesson to be learned is that there are still many mysteries about animal biology that remain to be solved — even in familiar animals, Videler told Live Science.

"Entirely new organs can still be discovered in big, popular animals using modern techniques," he said. "Even swordfish will have more to offer — we only need to study its anatomy better."

And though Videler — now age 75 — is retired, he has no plans to stop investigating the natural world anytime soon.

"There is so much to learn from nature," he added. "I hope to remain curious until I die."

The findings were published online today (July 6) in the Journal of Experimental Biology.