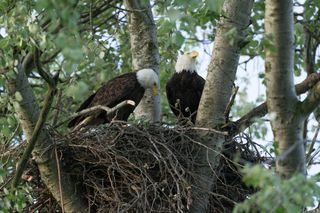 The national animal of the United States, the bald eagle is one of the most recognizable birds in the country. But are the mating behaviors of these large raptors just as conspicuous as their "bald" heads?

Bald eagles (Haliaeetus leucocephalus) can be found throughout the contiguous United States, as well as in Alaska, northern Mexico and most of Canada.

"Generally, they are very social and have an incredible ability to find other birds," said bald eagle expert Bryan Watts, director of the Center for Conservation Biology of the College of William & Mary and Virginia Commonwealth University. "The best way of attracting eagles is to have other eagles around."

In the nonbreeding season, the birds tend to congregate into huge communal roosts. Just outside these roosts are stable gathering areas, where the eagles interact socially and call to one another, particularly in the morning, Watts told Live Science. [Why Is the Bald Eagle America's National Bird?]

The mating and nesting season for bald eagles varies depending on their location. For instance, eagles in the southeastern states begin their nesting season in the fall, while those in the western states begin nesting near the start of the new year, according to the U.S. Fish & Wildlife Service. Location also determines whether or not the birds migrate to nest.

Whatever the case, the animals tend to get very aggressive during the breeding season and vigorously defend their territory. Both males and females engage in these sometimes-deadly battles.

Scientists don't know what characteristics bald eagles look for in potential mates or how the birds assess each other's reproductive potential. "We just have fragments of information," Watts said.

It's known, however, that bald eagle pairs engage in a number of courtship rituals as they build their bond.

The most famous and recognizable of these rituals is the "cartwheel courtship flight," in which two bald eagles will fly up high, lock talons and then get into a cartwheel spin as they fall toward the ground, breaking apart at the last minute. "And [in] some cases they actually hit the ground," Watts said.

It should be noted, however, that nonbreeding bald eagles may engage in this behavior antagonistically, as a kind of ritualistic battle.

A courting pair may also engage in a chase display, where they will chase each other before locking talons and doing aerial rolls.

Additionally, the birds may perform the "rollercoaster flight." During this aerial display, one of the birds will essentially act like a rollercoaster — it will fly up high, go into a steep dive, pull up high again and dive down again.

The pair will also work together to gather material to build a nest for their chicks, starting with the largest branches and slowly working in smaller pieces. Sometimes, the male will gather materials and give them to the female to construct the nest. The final piece of the nest is a lining made of grasses, corn husks, pine straw and other soft materials, and an egg cup composed of fine plant material that can help insulate the egg — the male and female may lay these pieces together, possibly as a form of pair bonding.

In all, nest building could take a couple of months, but bald eagles can also build their nests much quicker if need be (such as if the area is getting crowded with other birds).

Together until the end

As the pair gets closer to copulating, they will ramp down their aerial displays and instead focus more on intimate behaviors, such as sitting shoulder-to-shoulder, sitting in the nest structure together, preening and calling to one another. [In Photos: Birds of Prey]

When the female is ready, she will try to solicit the male to mate with her, such as by calling to him and bowing. To mate, the male will climb on the female's back and align his cloaca (waste and reproductive orifice) with hers to transfer sperm.

The pair may copulate several times a day during the breeding season, and the male will stay with the female to help incubate the eggs and raise the eaglets.

In some cases, new bald eagle pairs may not mate their first year together, instead spending several years in a particular location, possibly to assess each other or the nesting area.

Bald eagles typically mate for life and look for other partners only if their mating partner dies — they have a "divorce rate" that's less than 5 percent, according to Watts.

Interestingly, a "marriage" between one male and one female bald eagle isn't the only possible arrangement. "We have numerous documented examples of triads," Watts said. "Those typically involve a male and two females."

These triads can produce large clutches with contributions from both females, and all three adults provide food for the brood, Watts said, adding that "those are interesting situations, but they haven't been thoroughly studied."