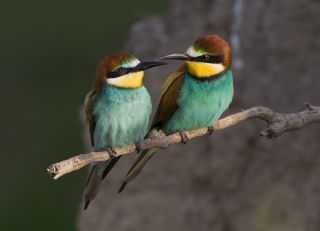 Bird sex organs are very different from those of mammals.
(Image: © Reddogs | Shutterstock.com)

Sure, birds can fly, but how do they have sex? Can they do it in the air? And where do they keep their reproductive organs?

For humans to understand bird sex, they must first throw out all thoughts of mammalian sex organs. Unlike mammals, most male birds don't have penises. Instead, both male and female birds have what's known as a cloaca.

The cloaca is an internal chamber that ends in an opening, and through this opening, a bird's sex organs — testes or ovaries — discharge sperm or eggs. This same opening also serves a less-sexy purpose: the expulsion of urinary and digestive waste.

During mating seasons, the cloacal openings of both male and female birds swell, protruding slightly outside their bodies. When birds are feeling frisky, they rub their swollen cloacas together. The male's sperm, which has been stored in his cloaca, is deposited into the female's cloaca, where it travels up the chamber and eventually fertilizes an egg.

Though the process of avian insemination is similar to that of humans and other mammals, you won't be seeing a birdie Kama Sutra anytime soon: Birds typically have sex in only one position. And despite rumors to the contrary, it isn't possible for birds to have sex while in flight.

Usually, the male perches on top of the female, who moves her tail feathers to the side to expose her cloaca. Arching back, the male rubs his cloaca against hers.

This delicate balancing act can often take several attempts before resulting in successful copulation. Perhaps for fun — or to increase the chance of insemination — birds often have sex many times throughout the course of their mating period.