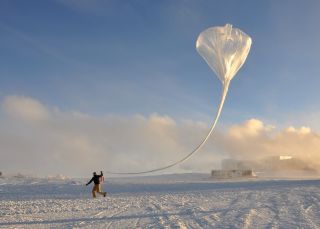 More than 30 years after scientists first spotted a hole in the atmosphere's protective ozone layer over the South Pole, they are seeing the "first fingerprints of healing," researchers reported today (June 30).

Measurements of the ozone hole taken in September revealed the breach has shrunk by more than 1.5 million square miles (4 million square kilometers) — about half the area of the contiguous United States — since 2000.

The researchers attributed the ozone's recovery to the continuing decline of atmospheric chlorine originating from chlorofluorocarbons (CFCs). These chemical compounds, once commonly used in aerosols, dry cleaning and refrigerators, were banned when nations around the world signed the Montreal Protocol in 1987 in an effort to repair the ozone hole. [Image Gallery: Life at the South Pole]

"We can now be confident that the things we've done have put the planet on a path to heal," lead author Susan Solomon, an atmospheric chemist at the Massachusetts Institute of Technology (MIT), said in a statement. "We got rid of them [CFCs], and now we're seeing the planet respond."

The ozone layer, which extends from 2 to 19 miles (20 to 30 km) above Earth's surface, protects the planet from the sun's harmful ultraviolet rays. Thinning of ozone, which is a molecule made up of three oxygen atoms, can occur due to exposure to certain chemicals, like CFCs.

The ozone hole, a region of thinned ozone, was discovered in 2000, when scientists noticed that the total ozone above Antarctica in October was dropping. From then on, ozone depletion was typically tracked using October measurements.

That's because the ozone hole varies seasonally, as specific conditions are needed for chlorine to eat away at the molecule, Diane Ivy, a research scientist at MIT and co-author on the new study, explained to Live Science in an email. Chlorine interacts with ozone in this destructive way only if light is present and the atmosphere is cold enough for polar stratospheric clouds to form. The clouds are the surfaces which these chlorine reactions can occur.

Ozone depletion therefore starts each year in late August, as Antarctica emerges from winter, with the hole fully formed by early October.

For their research, the scientists thought a clearer picture of chlorine's effects on the ozone would be seen by monitoring ozone levels in September.

"I think people, myself included, had been too focused on October, because that's when the ozone hole is enormous, in its full glory," Solomon said. "But October is also subject to the slings and arrows of other things that vary, like slight changes in meteorology. September is a better time to look, because chlorine chemistry is firmly in control of the rate at which the hole forms at that time of year."

There is still a long road to recovery for the ozone hole, the researchers said. The molecules that deplete ozone have very long life spans, and the study scientists estimate it will still be decades before complete recovery.

"We won't get back to pre-ozone-hole conditions for another 40-some years," study co-author Douglas Kinnison, a scientist at the National Center for Atmospheric Research in Colorado, told Live Science.

But scientists have seen healing of the ozone, which Ivy defined as "an identifiable increase in ozone that is linked to reduced amounts of ozone-depleting substances."

However, the hole itself may fluctuate each year in the healing process, due, in part, to volcanic activity. Eruptions emit sulfur dioxide, which can form aerosols in the stratosphere, allowing more ozone depletion to occur.

For instance, in 2015 the ozone hole neared a record-breaking size. Due to the April 2015 eruption of Calbuco in Chile, it was "a whopper of an ozone hole" that year, Kinnison said.

"So we probably will see a much less severe ozone hole [this year]," he said. "But we'll have to wait and see."