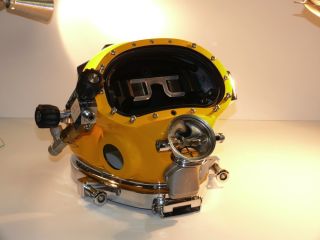 The U.S. Navy announced this month a "next-generation" and "futuristic" system: the Divers Augmented Vision Display (DAVD). Embedded directly inside a diving helmet, DAVD is a high-resolution, see-through heads-up display (HUD), meaning divers can see instrument readings or other data directly on the transparent display without having to lower their eyes.

"By building this HUD directly inside the dive helmet instead of attaching a display on the outside, it can provide a capability similar to something from an 'Ironman' movie," Dennis Gallagher, underwater systems development project engineer at the Naval Surface Warfare Center Panama City Division, said in a statement. "You have everything you visually need right there within the helmet." [See Photos of the Augmented Reality Tech in Navy Diving Helmets]

Augmented-reality (AR) devices superimpose information on the world we see, such as how Google Glass works. The technology has existed for years in some form or another. For instance, the HUDs in fighter aircraft as far back as the '90s were capable of showing information about the attitude, direction and speed of the planes.

For the U.S. Navy's purposes, their augmented-reality helmet display will offer divers real-time information, ranging from diagrams to text messages. By having this operational data in real time, divers can work more effectively and stay safe on their missions, according to military.

"Instead of having to rely on pre-dive briefings alone to determine what they are looking for, how specific items should appear and where they may be located, the DAVD system places the information right before divers' eyes with a look and feel comparable to a point-of-view video game display," the U.S. Navy said in the statement.

The system can be used for diving missions like underwater construction or salvage operations, according to the Navy, and eventually could be used by first responders and the commercial diving community.

Gallagher and his team are now working on components designed for both helmet systems and full-face masks. In-water simulation testing of the equipment is scheduled for October, with phase three of the project — hardening the system for field tests with dive commands — set to begin in 2017.