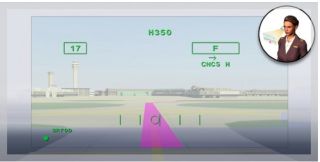 The world's deadliest aviation disaster took place on a foggy airport runway rather than in the air. That's why NASA is offering augmented reality glasses that would allow commercial airline pilots to see a virtual version of runways in even the worst weather conditions.

Such glasses represent a portable head-worn display that shows critical flight information such as airspeed, altitude and orientation floating in front of one eye at all times. The NASA display would also track pilots' heads so that an updated virtual outline of an airport's runways and towers always appears wherever they look — allowing them to keep their attention on what's happening outside rather than staring at a chart or tablet.

"If pilots are not familiar with the airport, they have to stop and pull out maps," said Trey Arthur, an electronics engineer at NASA Langley Research Center in Virginia. "This display, in the new world where these routes are going to be digital, can tell them what taxiway they're on, where they need to go, where they're headed, and how well they're tracking the runway's center line."

Similar heads-up display (HUD) technology exists for military fighter jet and helicopter pilots, who wear helmets with the transparent displays. Newer commercial airliners also use HUDs installed in the cockpit, but lack the head-tracking "augmented reality" of NASA's technology that layers virtual images or maps on top of a pilot's real-world vision.

Giving pilots better awareness on airport runways swarming with airplanes could prevent catastrophes such as the world's deadliest aviation incident at Tenerife in the Canary Islands in 1977. A collision there between a jumbo jet trying to take off and another jet sitting on the foggy runway ended in a blazing inferno that killed 583 passengers and crew.

"If the fog is in and you can't see the tower or certain parts of the airport, we would draw that on the display as well if it would enhance situational awareness," Arthur told InnovationNewsDaily.

The worst U.S. incident killed 49 people in 2006 when a regional jet crashed after trying to take off from the wrong runway. Such risks during takeoffs and landings have led the U.S. National Transportation Safety Board to put better runway safety on its "most wanted" list of improvements.

Arthur and his NASA colleagues made their head-worn display by combining a Rockwell Collins helmet display for soldiers with their own head tracker custom-built by Intersense. The head tracker combines built-in gyroscopes and a camera that detects passive paper targets pasted around a cockpit to tell where a pilot has turned his or her head.

The NASA technology boosted pilot performance just as well as the latest cockpit HUDs in flight simulations, and its portability could save on weight-related fuel costs for airlines. The test pilots also rated the head-worn display as being better than the cockpit HUD in questionnaires.

The U.S. space agency began offering its patented technology for commercialization in a notice posted on March 5, but that has not stopped Arthur from continuing to improve the device. He can still recall working on military helmet displays that weighed 10 pounds just a few decades ago, whereas the NASA display's weight is just a quarter of a pound.

"We did the research knowing the technology would eventually get smaller and smaller," Arthur said. "It's starting to come together so that you can get the sunglasses form factor."