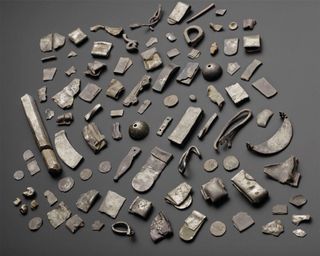 The entire silver hoard (except for the three pieces discovered in 1838) on display.
(Image: © National Museums Scotland)

More than 170 years ago, Scottish laborers clearing a rocky field with dynamite discovered three beautiful silver artifacts: a hand pin, a chain and a spiral bangle. But instead of looking for more treasures, they followed orders to turn the field into farmland, squashing hopes of archaeologists for years to come.

Recently, however, archaeologists surveyed the field and uncovered a hoard of 100 silver items, including coins, and pieces of brooches and bracelets, all dating to late Roman times, during the fourth or fifth centuries AD, according to a new report of the find, which is now called the Gaulcross hoard. (In archaeology, a "hoard" is a group of valuable objects that is sometimes purposely buried underground.)

"We set out, not really thinking we would find more silver," said study co-lead researcher Gordon Noble, head of archaeology at the University of Aberdeen in Scotland. "We just wanted to learn more about the context" of the original find, he said. [See Photos of the Silver from Gaulcross Hoard]

Originally, in the same field where the silver treasures were found, there were also two man-made stone circles, one dating to the Neolithic and the other the Bronze Age (B.C. 1670 to B.C. 1500), the researchers wrote in the report.

The three silver pieces were given to Banff Museum in Aberdeenshire, and are now on loan and display at the National Museum of Scotland in Edinburgh, the researchers said.

In 2013, two groups of researchers studied the field in northeastern Scotland, with the help of metal detectors.

On their second day of fieldwork, they uncovered three late-Roman-era silver "siliquae," or coins, that dated to the fourth or fifth centuries AD. They also found a silver strap-end, part of a silver bracelet, and several pieces of folded hacksilver (pieces of cut or bent silver), the researchers wrote in the report.

Encouraged by the finds, they ploughed on, excavating and examining the field over the next 18 months and eventually finding the 100 pieces of silver.

The new findings help shed light on the date of the Gaulcross hoard, suggesting it dates to the fifth or sixth centuries AD, the researchers said. Some of the Roman-era items in the Gaulcross hoard include hacked silver dish fragments, spoon handles and a belt fitting. The researchers also found a crescent-shaped pendant with double loops. [Photos: Rubbish Piles & Roman Mosaics Unearthed in Historical English City]

"Some of the objects in the Gaulcross hoard were themselves almost certainly connected to elites," the researchers wrote in the study. The silver hand pins and bracelets are uncommon finds, and were "clearly high-status objects that would have belonged to some of the most powerful members of post-Roman society," they said.

Silver was not mined in Scotland during the Roman period, and instead came from the Roman world, the researchers said.

"Late Roman silver was recycled and recast into high-status objects that underpinned the development of elite society in the post-Roman period," they wrote in the study. It's likely that non-Romans — such as the Pict people, who lived in Scotland before, during and after the Roman era — got the silver from looting, trade, bribes or military pay, they added.

Some of these silver pieces, such as the chunks of silver called ingots, may have served as currency, much as a gold bar did in more modern times, Noble said.

"It's a real melting pot of different objects and different cultural origins," Noble said. "It's a really fascinating hoard."

The study was published in the June issue of the journal Antiquity.