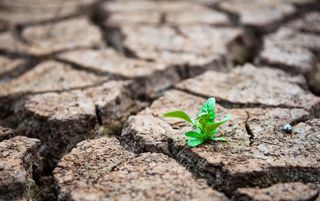 In his dystopian novel "New Charity Blues," Camille Griep tells the story of a quiet, yet deadly, conflict surrounding water rights. Growing up in Montana, he said, his formative years were ensconced in drought. On one side of the fictional conflict is a long-suffering desert town that becomes a self-sufficient bastion, hoarding shared water in a new reservoir and stopping at nothing to protect its newfound success. On the other is a city that can't rebuild without basic hydroelectric infrastructure. Below is an excerpt from Griep's "New Charity Blues" (47North, 2016).

On the day the quiet war came to New Charity, my brother and I were out checking fences.

I was high up in Windy's saddle, looking out over the ridge, wondering if anyone on the west side of the wall beyond was looking my direction and if they, too, were marveling at the big and beautiful world the Spirit had given us.

This had once been sparse land, but our people had always inhabited this place, made do on the same dusty soil, aided by the four elemental magics. Mama's and the Governor's families had lived and died in New Charity before us. They built the wall around the town and renovated the Sanctuary in order to thank the Spirit of the land, the one that sanctified our crops and blew the breath into the prized New Charitan horses we raised, and took care of our town and the towns that spread across the prairie from coast to coast.

Five years ago, when the plague spread outside the wall and the sick sought shelter, New Charity was forced to close the gates for our own protection. And after, the Bishop called on the Spirit and it gave us the Blessing.

The people of New Charity offered up their magic to the Spirit, and the Bishop channeled that power to form a reservoir, one that purified the water and stopped the poisoned river from flowing to the City downstream. And afterwards, our own streams filled and middling crops grew tall as the Spirit blessed the land, too. The Spirit blessed the horses we rode and the stock we raised. Folks could graze their cattle on land that was once scrub. Future generations would no longer carry the old magics, but we were safe. And alive.

It was impossible to deny we were special to the Spirit. All we had to do was look out on the once-brown hills, now emerald with prairie grasses. The Governor, my father, said he wished his own father could see it.

That afternoon, I tried to take a picture in my head of all the wide wild world. And that was when a vision started to come, bleeding inwards on the edge of my mind.

I'd barely had time to register the vision when Windy let out an alarmed whinny, bucked hard, and suddenly I was up close and personal with those grasses I'd been studying. I somersaulted from my saddle and landed facedown on the ground. Len, who'd more likely than not spooked Windy on purpose, clutched his stomach, shaking with laughter. "You should see your face!"

He cantered his stallion in a circle around us as I wiped away the tears on my cheeks -- more from wind and hay fever than pain – and my fists came away muddy. "I don't see what's so funny about it." I dusted my knees and elbows, picking a few small rocks from my palm. "My face's the same as yours. "Mama always said Len and I were mirror images, though I'd argue that at least for the first decade or so my twin always managed to acquire an extra layer of dirt.

My great-grandma – the Governor's grandma – was the last prophetess in the Sanctuary, until Len and I came into our powers early. The famed two-for-one Acolytes of the Willis family. Also the only New Charitans not asked to sacrifice our gifts. Our responsibility was bigger. We searched the future with our Foresight for things to come – the bad and the good. We counseled the parishioners, tempering dashed hopes and offering glimpses of a better tomorrow. We were beacons for their boats of dreams drifting in the sea of the unknown. We were capable and earnest in good news, sympathetic and kind when tidings were bad.

Which I guess was a good thing since I was a disaster at just about everything besides shoveling manure. I couldn't have disappointed Mama more if I'd come out with three arms and a set of antlers.

I led Windy around in a tight circle a few times to calm her down, then mounted back up. Len began to hiccup.

"Serves you right." I nudged Windy into a trot. "Last one to the barn mucks stalls!"

"No contest. Your mare's eaten so many hay bales she's practically the shape of one."

"Are you calling my horse fat?"

"Hey, if the horseshoe fits." He kicked his horse into a gallop.

Even though we shouldn't have, Len and I let the horses run home, giddy on speed as the ridge flattened into prairie. When their fetlocks collides with the warm sagebrush, it was what I imagined heaven smelled like—juniper and the warming soil of early summer.

It was the last time things were simple. After dinner we began inadvertently choosing sides in a battle our Foresight had not warned us of.

The quiet war came almost silently. But all the same, it came.

New Charity Blues
Amazon
$10.99
View
We check over 130 million products every day for the best prices