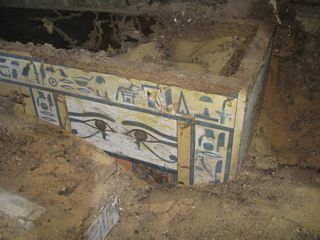 The coffin of Sattjeni in her tomb.
(Image: © Alejandro Jiménez Serrano)

Two eyes painted on a newly discovered Egyptian coffin seem to stare out from across millennia, conveying the secrets of the ancient Egyptian elite.

The coffin, discovered this year in the necropolis at Qubbet el-Hawa across the Nile River from Aswan, belonged to an important local woman, Sattjeni, daughter of one governor, wife of another and mother of two more, said excavation leader Alejandro Jiménez-Serrano, an Egyptologist at the University of Jaén in Spain.

Sattjeni's mummified body was buried in two cedar coffins made of wood imported from Lebanon. Though the outer coffin had degraded over the nearly 4,000 years since Sattjeni's death, her inner coffin was in excellent condition, according to Egypt's antiquities ministry, which announced the discovery May 24. [See Photos of Sattjeni's Elaborate Burial]

Sattjeni was not a royal, but her family practiced royal strategies to hold on to their governing power: She married her sister's widower, and the family also associated itself with the ram-headed deity Khnum, much as pharaohs intermarried to keep power in the family and claimed to be descended from the gods.

In an email interview with Live Science, Jiménez-Serrano revealed more about the excavations at Qubbet el-Hawa and the life of Sattjeni.

Live Science: Tell us about the excavations at west Aswan. What kinds of artifacts and structures do you find at this site? What was this area used for during the Middle Kingdom (between about 2000 B.C. and 1700 B.C.)?

Jiménez-Serrano: Qubbet el-Hawa is one of the most important nonroyal necropolises of ancient Egypt. Its importance lies in the great quantity and quality of the biographical inscriptions carved in the façades of the funerary complexes. The necropolis was mainly used to bury the highest officials of the nearby town of Elephantine, the capital of the southernmost province of Egypt, at the end of the third millennium and the beginning of the second (2200 B.C. to 1775 B.C). The governors were buried together with their relatives; the members of their courts (officials and domestic service) were buried in other smaller and less-decorated tombs. Thus, today, we know the existence of 100 tombs, of which only 80 have been completely cleared.

During the Middle Kingdom, especially during the 12th Dynasty (1950 B.C. to 1775 B.C.), the governors of Elephantine built giant funerary complexes in the necropolis of Qubbet el-Hawa. Some of them are beautifully decorated and have important inscriptions.

Live Science: How did you uncover the burial of Sattjeni? What was that moment like?

Jiménez-Serrano: In 2013, we discovered the upper part of a chamber, which belonged to a tomb that was probably quarried in the Byzantine period (fifth century A.D.). In the walls of this chamber, there was a Christian prayer painted by the Coptics. Thus, we thought that the area was disturbed. However, that chamber at the end was not a chamber, but the beginning of a shaft. During this year, we began the excavation of the shaft, and the more that we excavated, the more we got the sensation that a great discovery might appear ... and it appeared!

The worker called me, and I went to the bottom of the shaft, where there was a tiny aperture. With a torch, I could have a look inside, and the first thing that I could see were hieroglyphs. Later, we could determine that those hieroglyphs were on the coffins of the Lady Sattjeni. [Photos: More Than 40 Tombs Discovered in Upper Egypt]

Live Science: Who was Sattjeni, and why was she an important figure?

Jiménez-Serrano: Sattjeni was the second daughter of one of the most important figures of the 12th Dynasty, the governor Sarenput II. Unfortunately, her brother Ankhu died shortly after his father, and there were no male successors. So she and her sister Gaut-Anuket had the rights of the rule in Elephantine. The latter married a certain official called Heqaib and converted him into the new governor of Elephantine: Heqaib II. However, we suspect that Gaut-Anuket did not live much time, because Sattjeni married Heqaib II. They had at least two children, who became the governors of Elephantine successively, as Heqaib III and Ameny-Seneb.

Live Science: What does this discovery tell you about 12th Dynasty society?

Jiménez-Serrano: This discovery shows that the local dynasties of the periphery of the State emulated the royal family. In this concrete case, we can confirm that women were the holders of the dynastic rights. Probably, the members of these families married as the royal family — brother with sister — in order to keep the divine blood "pure." We must not forget that Sattjeni's family declared themselves heirs of a local god.

Live Science: What were the coffins like, and was there anything interesting about their construction or preservation?

Jiménez-Serrano: We are still investigating why the outer coffin was so decayed compared to the inner [one], which was in perfect condition. Both were made with the same foreign wood: cedar from Lebanon. Perhaps the inner coffin was treated with an organic substance that we have not yet detected.

(This interview was edited lightly for length and clarity.)