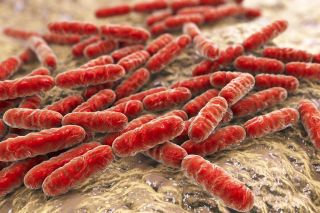 A computer image of Bacteria Lactobacillus, bacteria which are normally found in the human intestine, and are are used as probiotics and in yogurt production.
(Image: © Kateryna Kon/Shutterstock.com)

Children whose tummies hurt for no clear reason could benefit from taking probiotics, a new review study found.

The researchers looked at ways to treat so-called functional abdominal pain, or stomach pain that doesn't have a clear cause. The condition is a "big problem," in children, said study co-author Dr. Morris Gordon, a senior lecturer at the University of Central Lancashire's School of Medicine in the United Kingdom. It affects about 14 percent of kids worldwide, according to a 2015 study About a quarter of all children who see a gastroenterologist for stomach problems are diagnosed with functional abdominal pain, according to the American College of Gastroenterology.

There is no standard treatment for the condition, which can cause persistent or intermittent symptoms for months. But some recent studies have suggested that probiotics, or "good bacteria," might help these children.

In the new review, researchers analyzed information from nine previous studies that involved a total of about 700 children ages to 4 to 18 who had functional abdominal pain. In all of these studies, children were randomly assigned to take either probiotics or a placebo for four to 16 weeks.

The results showed that probiotics were indeed effective at reducing symptoms in children with functional abdominal pain. Children who received probiotics experienced about a two-thirds reduction in their pain, compared with children who were on the placebo. In addition, children who took probiotics had about 1.5 fewer pain episodes per week, on average, compared to before they started the treatment, Gordon said. [8 Tips to Be a Probiotic Pro]

The results were very robust, leading the researchers to conclude that probiotics should be considered as a treatment option for children who have functional abdominal pain, Gordon said.

"I think this is pretty much a line in the sand, that probiotics do work in this context for children," said Gordon, who presented the findings in San Diego on Monday (May 23) at Digestive Disease Week, a scientific meeting focused on digestive diseases.

Still, there are some unanswered questions, such as how long children should take probiotics and whether their symptoms will come back if they stop the treatment. [Don't Be Fooled: 5 Probiotics Myths]

It's not clear why some children experience such abdominal pain in the first place, although some researchers have hypothesized that people with the condition are more sensitive to pain in their gut. It's also thought that perhaps a disturbance of a person's normal gut bacteria may increase inflammation, which could lead to pain, Gordon said.

Probiotics might work by restoring the normal balance of gut bacteria, and in turn, reducing inflammation and improving movement of the gut, he said.

The study will be published as a Cochrane Review, considered the "gold standard" of medical reviews.