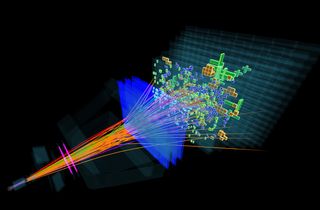 A display of a proton-proton collision taken in the LHCb detector in the early hours of May 9.
(Image: © LHCB)

The Large Hadron Collider is the most complex machine ever built by humankind and it is probing into deep quantum unknown, revealing never-before-seen detail in the matter and forces that underpin the foundations of our universe. In its most basic sense, the LHC is a time machine; with each relativistic proton-on-proton collision, the particle accelerator is revealing energy densities and states of matter that haven't existed in our universe since the moment after the Big Bang, nearly 14 billion years ago.

The collider, which is managed by the European Organization for Nuclear Research (CERN) is located near Geneva, Switzerland.

With the countless billions of collisions between ions inside the LHC's detectors comes a firehose of data that needs to be recorded, deciphered and stored. Since the 27 kilometer (17 mile) circumference ring of supercooled electromagnets started smashing protons together once more after its winter break, LHC scientists are expecting a lot more data this year than what the experiment produced in 2015.

"The LHC is running extremely well," said CERN Director for Accelerators and Technology Frédérick Bordry in a statement. "We now have an ambitious goal for 2016, as we plan to deliver around six times more data than in 2015."

And this data will contain ever more detailed information about the elusive Higgs boson that was discovered in 2012 and possibly even details of "new" or "exotic" physics that physicists could spend decades trying to understand. Key to the LHC's aims is to attempt to understand what dark matter is and why the universe is composed of matter and not antimatter.

In fact, there was already a buzz surrounding an unexpected signal that was recorded in 2015 that could represent something amazing, but as is the mantra of any scientist: more data is needed. And it looks like LHC physicists are about to be flooded with the stuff.

Central to the LHC's recent upgrades is the sheer density of accelerated "beams" of protons that are accelerated to close to the speed of light. The more concentrated or focused the beams, the more collisions can be achieved. More collisions means more data and the more likelihood of revealing new and exciting things about our universe. This year, LHC engineers hope to magnetically squeeze the beams of protons when they collide inside the detectors, generating up to one billion proton collisions per second.

Add these advances in extreme beam control with the fact the LHC will be running at a record-breaking collision energy of 13 TeV and we have the unprecedented opportunity to make some groundbreaking discoveries.

"In 2015, we opened the doors to a completely new landscape with unprecedented energy. Now we can begin to explore this landscape in depth," said CERN Director for Research and Computing, Eckhard Elsen.

The current plan is to continue proton-proton collisions for six months and then carry out a four-week run using much heavier lead ions.

So the message is clear: Hold onto your hats. We're in for an incredible year of discovery that could confirm or deny certain models of our universe and revel something completely unexpected and, possibly, something very exotic.