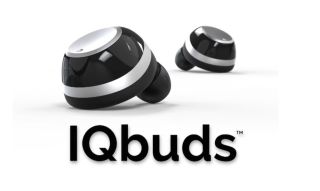 The IQbuds from Nuheara are equipped with noise-cancellation technology.
(Image: © Nuheara)

If you've ever been on a crowded bus and found yourself stuck between a loud conversation on one side and obnoxiously loud music on the other, the idea of being able to cancel out that background noise probably sounds like bliss. Now, new earbuds can not only help boost your hearing and cancel out pesky noise, but also serve as wireless earphones for making phone calls and listening to music hands-free.

Wearable devices such as fitness trackers and smartwatches have become popular accessories, and recently, companies have started developing "hearables" — earbuds that electronically control how a person hears the world.

The IQbuds from Nuheara in San Francisco can use Bluetooth to wirelessly connect to a smartphone. As such, these earbuds can act like wireless earpieces, so you can listen to music, podcasts or audiobooks in stereo; make hands-free phone calls; and engage with Siri and other voice-enabled apps. Users can also answer phone calls and start or stop audio with a simple tap of the earbuds. [10 Technologies That Will Transform Your Life]

Furthermore, IQbuds are equipped with noise-cancellation technology, which generates sounds that can neutralize background noise, such as distracting chatter in crowded places. In addition, microphones in each IQbud capture incoming audio, letting in sounds that you may want to hear, such as someone next to you talking to you. As such, people can "genuinely and in real time experience the ability to augment their hearing in noisy social environments," said Nuheara co-founder David Cannington.

A smartphone app accompanying the IQbuds can help users control exactly what they hear in the world around them. Moreover, the app can save hearing settings personalized for specific environments; for instance, you may want to hear as much of your surroundings as you can while riding a bicycle, but suppress background noise while in a cafe.

The founders of Nuheara came up with the idea for the IQbuds in late 2014. Cannington said that no other wireless earbud combines a Bluetooth earpiece with the abilities to boost hearing and cancel noise.

IQbuds can operate over 4 hours of continuous use with the help of rechargeable lithium-ion batteries and low-power electronics that optimize battery power. And the carrying case that holds the earbuds houses three additional charges, granting an extra 12 hours of battery life, the company said.

Nuheara representatives said hearables will grow to become a large segment of the wearables market. "Voice-recognition technologies will drive how consumers interact with their devices, and hearing-technology platforms will play a major role in this development," Cannington said.

So far, more than 300 people have tested IQbuds prototypes, in Australia, the United States and Canada, Cannington said. Nuheara plans to ship IQbuds to backers in December, and the devices should reach the market in early 2017, he added. They will be compatible with Android and iOS devices, the company said.