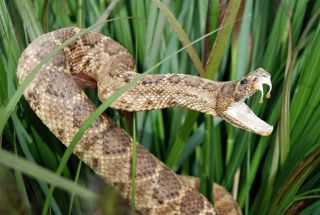 Readying for attack, a rattlesnake bares its fangs.
(Image: © dreamstime.com)

My daughter has a snake, a tiny 8-inch-long, innocuous corn snake, and I hate that thing.      I have seen it, and once, in the name of pretending to be a good mother, I actually touched it. But I hope to never see or touch it again as long as I live.      As an anthropologist, I know that most people around the globe hate snakes (and yes, I know there are people like my daughter who love these disgusting reptiles, but really, they are freaks, all of them except my daughter). The fear of snakes is called ophidiophobia, which is apparently a subset of herpetophobia, the more inclusive fear of reptiles. Although ophidiophobia might seem like a pathology — how often, really, do we encounter poisonous snakes? — anthropologist Lynn Isbell of the University of California, Davis, suggests in her new book "The Fruit, The Tree, and the Serpent: Why We See So Well" (Harvard University Press, 2009) that this fear is not only part of our nature, it's also a good thing.      Isbell came to this conclusion while studying monkeys. One day she put a fake snake into the large outdoor cage of Rhesus macaques at the Davis Primate Center only to see a real snake slither into the cage. About half the 80 resident monkeys gathered around the real thing, mobbing it, calling out in alarm. The fear of snakes, Isbell reasoned, must be deeply embedded in our primate history.      More surprising, Isbell claims that the fear of snakes has driven the evolution of our excellent visual abilities. Primates, including humans, see really well. Sure, our vision is not as good as eagles, but still, we see in color and have very good 3-D perception. We also have a pit in each retina that gives us the ability to spot small objects, like little things in bushes. In general, Isbell explains, the neurology of vision, that is what we see and how we perceive it, is expanded in primates over other mammals.      Anthropologists have always assumed that this great vision was a necessary adaptation for life in the trees. Leaping around the canopy requires depth perception, and color vision comes in handy when looking for ripe fruits and leaves.      Going against the standard thinking, Isbell thinks that spotting snakes is the real reason we see well. Snakes, it seems, were the oldest known predator on primates, and they have been the most persistent predators over millions of years. Today, monkeys are scared of them and humans make horror films about them, like "Snakes on a Plane."      Isbell reasons that our vision co-evolved with venomous snakes having monkeys for dinner. As a result, humans have good vision too. But Isbell thinks there might be even more to the snake story for humans.      People are famous for pointing at things, especially things that scare us. And we usually say something like "Ahhh, snake" (or "spider" or "gun") when pointing at something that elicits fear. It may be that the neurological system that brought us good vision to deal with snakes also pushed for the evolution of human communication. And thank goodness for that development because it allows me, a human with naturally good vision and a highly evolved fear of snakes, to say to my snake loving daughter, "Get that thing away from me."