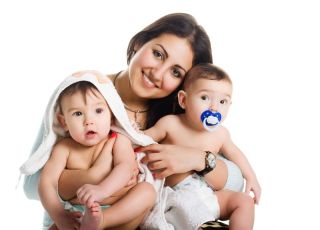 Both genes are related to the production and processing of the hormone that helps oocytes (egg cells) mature.

"There's an enormous interest in twins, and in why some women have twins while others don't," study co-author Dorret Boomsma, a biological psychologist at Vrije Universiteit Amsterdam, said in a statement. "The question is very simple, and our research shows for the first time that we can identify genetic variants that contribute to this likelihood." [Seeing Double: 8 Fascinating Facts About Twins]

There are two ways that a woman may conceive twins. In one case, her ovaries release two eggs at the time of ovulation, and both are fertilized and become embryos; this results in fraternal, or nonidentical, twins. In contrast, identical twins are conceived when one embryo splits into two early in its development.

In very rare circumstances, more unusual twinning can occur: Doctors have identified semi-identical twins (who were formed from the same egg but two different sperm), and even identical triplets and quintuplets.

Scientists have long known that women who have a family history of fraternal twins — especially among their female relatives — are likelier to have twins themselves, suggesting that genetics plays a role. And twins are extremely common in some populations, such as the Yoruba people of West Africa, while it is much rarer in other populations, such as those from Asia. Older women and women who undergo fertility treatments are likelier to have twins as well.

However, teasing out the genetic underpinnings of twinning proved difficult.

To look for which version of genes might increase the likelihood of having twins, Boomsma and her colleagues analyzed the genomes of 1,980 women who had spontaneously conceived fraternal twins, and compared them to the genes of 12,953 women who bore singletons.

They identified certain variants of genes that occurred much more commonly in the women who bore twins.

One variant, in a region of DNA near a gene called FSHB, seemed to be associated with producing higher levels of follicle-stimulating hormone — a chemical that helps an egg mature. (During each cycle, a woman typically releases an egg only after it has sufficiently matured.) With more FSH, the odds of two eggs being released per cycle — one from each ovary — may increase, the researchers hypothesized.

A second variant, in a gene called SMAD3, seemed to alter how receptive the ovaries are to FSH signaling. Women with this variant may produce average levels of FSH, but have ovaries that are more sensitive to the hormone, triggering the release of two oocytes per month.

"This genetic variant is totally novel and hadn't been shown before as a candidate gene for twinning," Cornelis Lambalk, a gynecologist at VU Medical Center Amsterdam, said.

Still, these two gene variations are only part of the puzzle. Together, they increase a woman's odds of having twins by only about 29 percent, suggesting that many other genes may be involved in the process, Boomsma said.