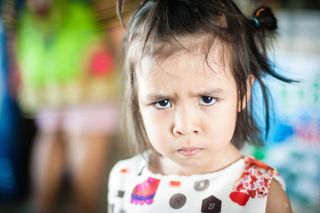 Many parents think that a swat on the bottom will, at the very least, get a kid's attention and make the child more obedient. Still others adhere to the biblical injunction not to "spare the rod and spoil the child."

But a new analysis of more than 50 years' worth of studies suggests that spanking may backfire. In fact, kids who were spanked were more likely to defy their parents, have mental health problems and be anti-social, the research finds.

"Our analysis focuses on what most Americans would recognize as spanking and not on potentially abusive behaviors," Elizabeth Gershoff, an associate professor of human development and family sciences at the University of Texas at Austin, said in a statement. "We found that spanking was associated with unintended detrimental outcomes and was not associated with more immediate or long-term compliance, which are parents’ intended outcomes when they discipline their children." [10 Scientific Tips for Raising Happy Children]

While most people nowadays decry horrific child abuse or neglect, some forms of corporal punishment are widely accepted. A 2014 UNICEF study found that about 80 percent of parents spank their children worldwide. In the United States, about half of all parents spank their children at least some of the time, according to a survey conducted by the Pew Research Center in December 2015. And 76 percent of men and 65 percent of women agree that children sometimes need a "good, hard spanking," according to a 2014 U.S. study by Child Trends, a nonprofit research center based in Washington, D.C.

But does this widespread belief actually jive with the data?

To find out, Gershoff and her colleague Andrew Grogan-Kaylor, an associate professor at the University of Michigan School of Social Work, looked at many research studies that collectively analyzed more than 160,000 children over the last five decades. The meta-analysis included studies that focused specifically on spanking, not harsher or potentially more injurious disciplinary methods that veer more toward abuse.

The findings were overwhelming: Spanking, which was defined as an open-handed hit to the behind or the extremities, was tied to 13 of the 17 negative outcomes the researchers studied. In particular, children who were spanked were likelier to have more mental health problems and to be more anti-social. Those results fit with past research, which found that spanking is associated with lower IQs, higher levels of aggression, and depression, anxiety and paranoia.

What's more, spanking didn't seem to accomplish its stated aim. Though some studies suggest kids who are spanked may be slightly more likely to comply in the short term, in the long term, they become more defiant than their peers who were not spanked, the researchers reported April 7 in the Journal of Family Psychology.

Still, the study couldn't prove causation. One possibility is that kids who have a predisposition to disobedience and conduct problems are likelier to elicit harsh punishment from their parents, and because the current research did not include randomized trials, it could not rule out that possibility, Gershoff said. (It's unlikely researchers could ever get such data, as no ethics committee would approve a study whose protocol was to randomize kids to either the "You get hit and you don't get hit," conditions, Gershoff told Live Science.)

In this study, the negative outcomes that are tied to spanking are similar to those associated with harsher forms of physical violence toward children, the researchers said.

"We as a society think of spanking and physical abuse as distinct behaviors," Gershoff said. "Yet our research shows that spanking is linked with the same negative child outcomes as abuse, just to a slightly lesser degree."