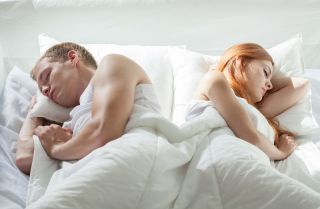 Some people like to wear pajamas to bed, while others go for shorts and a T-shirt. Still others prefer to sleep in nothing at all.

For those who choose to wear something, there is yet another decision to be made before bedtime: Should you keep your underwear on or not?

Live Science recently posed this question to a few medical experts to find out whether there are any health-related reasons for men and women to choose for or against underwear in bed. Here is what the experts said.

In general, a woman's bottom and genital region don't need to be totally in the buff while she sleeps, said Dr. Alyssa Dweck, an obstetrician and gynecologist in Mount Kisco, New York, and a clinical assistant professor of OB/GYN at Icahn School of Medicine at Mount Sinai in New York City. Most women can sleep with their underwear on and not risk encountering any health problems, she told Live Science. [5 Myths About Women's Bodies]

But there is one group of women who may benefit from not wearing underwear to bed and from aerating their bottom at night: Women who suffer from chronic vulvitis (an inflammation of the folds of skin outside the vagina) or chronic vaginitis (inflammation of the vagina), Dweck said. These women are prone to vaginal yeast infections, itchiness and irritation, and are likely better off if they sleep without underpants, she said.

The reason Dweck recommends being bare-bottomed at night is because yeast and bacteria can thrive and proliferate in dark, moist and warm places, she said. When a woman's private parts are covered up all day by confining clothing and nonbreathable fabrics, including sweaty workout clothes or sanitary pads, it can cause vaginal irritation and moisture to collect in this area, providing a perfect breeding ground for yeast or bacterial infections, Dweck said.

Aeration of the genitals is good for women who are prone to vaginal infections, itchiness and irritation, and baring their bottoms can be part of a general hygiene regimen that might afford them some relief, Dweck said. During the rest of the day, cotton underwear is the best choice for women having these issues, because it's absorbent, she said.

An added benefit of keeping panties off while in bed is that it may enhance intimacy between a woman and her partner, Dweck said. But if a woman is having her period, she may want to wear her underpants for added protection while sleeping, Dweck said. This is true even for women who are prone to frequent vaginal infections, she said. [7 Facts Women (And Men) Should Know About the Vagina]

Boxers or briefs (or nothing)

For men, there is no health benefit, nor is there any harm, from going commando to bed, said Dr. Michael Eisenberg, a urologist and the director of male reproductive medicine and surgery at Stanford University Medical Centerin Palo Alto, California.

And for men who prefer to sleep in underwear and who are trying to conceive with their partners, there is no significant difference between wearing boxers or briefs, Eisenberg said. He recently worked on a study, published on March 3 in the journal Andrology, that looked at whether the type of underwear men wore — or its absence — had any effect on a couple's ability to conceive a baby during a 12-month period.

The researchers asked about 500 men about their underwear choices during the day and at night. Results showed it didn't make much difference for conception outcomes what men wore at night (boxers, briefs or nothing at all), Eisenberg said. Those outcomes include the amount of time it took for couples to become pregnant or the compounds present in the men's semen. [Macho Man: 10 Wild Facts About His Body]

These findings should be reassuring to many men, showing that wearing whatever makes them feel comfortable won't affect conception, Eisenberg said. Even so, he said he was surprised by how many men switched their underwear type between the day and night when they were hoping to become pregnant with a partner.

Previous studies of men have found mixed evidence. Some research suggested that wearing tighter underwear can increase the temperature of men's testicles and may be linked with poorer semen quality, compared with men who wore looser fitting underwear. But other studies have not found that men’s underwear choices affect male fertility. [How Much Sleep Do I Need? (Infographic)]

On the whole, Eisenberg said, his study showed that men's underwear habits probably didn't matter much in their ability to father children.