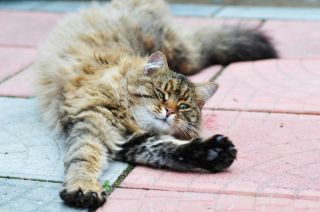 If there were an Olympic event for stretching, cats would win gold. They're constantly stretching their muscles, likely for many of the same reasons that people do, experts told Live Science.

The main reasons? It feels good and increases blood flow, said Andrew Cuff, a postdoctoral researcher of anatomy at the Royal Veterinary College in London.

Cats sleep between 12 and 16 hours a day, about twice as much as people do, according to Rubin Naiman, a clinical psychologist at the University of Arizona, as reported by the Huffington Post. When humans sleep, the brain paralyzes most of the body's muscles to prevent people from acting out their dreams. The same thing happens to cats during catnaps, which prevents the cat from sleepwalking off the sofa or wherever it's snoozing, Cuff said. [Here, Kitty, Kitty: 10 Facts for Cat Lovers]

Once the cat wakes up, the stretching begins.

"Cats stretch to get their muscles moving again after periods of inactivity, whether they've been sitting still or sleeping," Cuff told Live Science.

When a cat is sleeping or relaxed, its blood pressure drops, Cuff said. The same is true for people, he added. Stretching can help to reverse that.

"As you stretch, it activates all of your muscles and increases your blood pressure, which increases the amount of blood flowing to the muscles and also to the brain," Cuff said. "This helps wake you up and make you more alert."

As the muscles start moving with each stretch, they also flush out the toxins and waste byproducts that build up during periods of inactivity. For instance, carbon dioxide and lactic acid can accumulate in a cat's body, but stretching can increase blood and lymph circulation, which helps to remove the toxins, he said.

What's more, stretching readies the muscles for activity. If a mouse scurries by — or, let's be honest, a spider if we're talking about house cats — the cat will be prepared to pounce if he or she has already stretched its muscles.

"It's good for them to be ready to go at any instant," Cuff said. "Whether it's a snake, a feather or something on TV, as the case may be with cats."