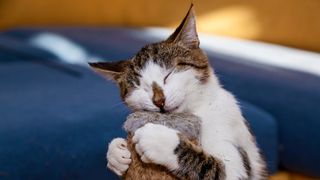 Offer a pinch of catnip or a catnip-filled toy to your pet feline, and her response might be dramatic ... and silly. She may roll on her back, dart wildly around, drool, lick the catnip and rub it on her face and body, or flop over and lie there purring.

Her actions seem goofy and comical, and somewhat resemble the uncoordinated and gleeful behavior of someone who's had a little too much to drink or is pleasantly under the influence of recreational drugs.

But is that what's happening here? Does catnip make cats high?

Related: In Photos: Animals That Get High

Catnip (Nepeta cataria) belongs to the mint family Lamiaceae, which includes aromatic herbs such as rosemary, sage, oregano and basil. The compound that plays the biggest role in the so-called catnip effect in domestic cats is produced in specialized glands in catnip's leaves and flowers and is called nepetalactone, said Jim Simon, a professor of plant biology and co-director of the Center for Sensory Sciences and Innovation at Rutgers University in New Brunswick, New Jersey.

"When you buy catmint [another cat-attracting plant in the Lamiaceae family] or catnip from a nursery, they're usually hybrids sold for ornamental purpose; they usually don't attract cats because they have very little nepetalactone," Simon told Live Science.

There are other compounds in catnip that are similar to nepetalactone in their molecular structure, and some can even stimulate a response on their own, but nepetalactone is the strongest of the group, Simon said. Cats are attracted to the odor of nepetalactone, which binds to receptors in their noses and often produces behavior that appears euphoric.

Superficially, a cat's response to catnip looks similar to a narcotic drug response in people. "They become playful and get agitated, they get excited, and then they go to sleep. But there's no information to show that catnip is operating the same way that medical cannabis, marijuana or cocaine does," Simon said.

In humans, consumption of alcohol, marijuana, heroin or cocaine stimulates brain cells to release mood-altering dopamine. But while cats may appear to be enjoying themselves when they're rolling around in catnip, scientists can't say for sure what's happening in the cat's brain and how it's being affected by the plant, Kornreich told Live Science. However, some studies have shown that when cats are given compounds like naloxone that block opioid receptors in the central nervous system, catnip's effects are minimized or even eliminated, suggesting that opioid receptors might be involved.

Not all cats respond strongly to catnip. But far more cats may be susceptible to the plant than once thought.

"It used to be believed that about two-thirds of adult cats adults respond — cheek-rubbing, rolling on the ground, vocalizing," Kornreich told Live Science. But a study published in 2017 in the journal Behavioural Processes suggests that some cats may exhibit a less active response to the plant.

"They assume what's called a kind of sphinx position, and they vocalize less," Kornreich said. "The results of this study suggest that a much higher percentage of cats — if not all cats — are somehow affected by catnip."

Even domestic cats' wild cousins aren't immune to catnip's effects. Hunters have used catnip to trap cougars and mountain lions, hanging dried plants to lure the big cats with their tempting aroma, Simon said. Studies have also shown that lions, leopards and jaguars respond to the compounds found in catnip, though tigers appear to be unaffected, Kornreich said.