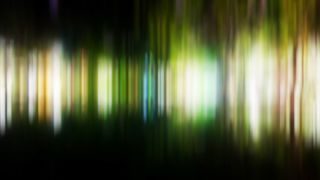 The new experiment also shows other bizarre effects of light, such as pairs of images forming and annihilating each other.

Taken together, the results finally prove a century-old prediction made by British scientist and polymath Lord Rayleigh. The phenomenon, called time reversal, could allow researchers to develop ultra-high-speed cameras that can peer around corners and see through walls. [In Images: The World's 11 Most Beautiful Equations]

Lord Rayleigh — the brilliant British physicist who discovered the noble gas argon and explained why the sky is blue — also made a bizarre prediction about sound waves nearly a century ago. Rayleigh reasoned that, because the speed of sound is fixed, an object traveling faster than that while spewing out sound would result in sound waves that would seem to travel in the opposite direction of the object and thus seem to be reversed in time orientation. For instance, a phonograph on a plane traveling at Mach 2, or twice the speed of sound, would seem to play the music backward.

No scientists really doubted this notion, but there was no easy way to test it.

Sound travels at 761.2 mph (1,225 km/h), but that means that, to hear a 3-second clip of music going backward, a supersonic jet traveling at Mach 2 (or twice the speed of sound) would start replaying the music more than a mile from the listener's location. The scattering and absorption of the sound waves in the air would make the music completely inaudible by that time, Faccio said.

But Faccio and his colleagues realized that if Rayleigh's predictions held true, the same effect would occur in other types of waves, such as light waves. Light travels much, much faster than sound, at 670 million mph (1.1 billion km/h). And the wavelengths themselves are tiny, meaning the time reversal can be demonstrated in a normal-size room.

The researchers were also interested in studying this idea because they were developing ultra-high-speed cameras that could peer around corners, and the phenomenon could affect their algorithms.

There was just one problem with testing Rayleigh's prediction with light: Nothing can travel faster than the speed of light.

To create a faster-than-light source, the team used a strange phenomenon called illumination fronts, which had previously been described in a series of fascinating thought experiments.

The trick behind illumination fronts is that, while an image may be traveling faster than light, the photons themselves never exceed light speed.

Here's how Illumination fronts work. Imagine taking a laser pointer and flicking the point across a vast and distant wall. While the photons traveling from the laser pointer to the wall are moving at their ordinary speed, because the light hits the wall at an angle, the dot on the wall (the illumination front) always moves faster than that. [Science Fiction or Fact? The Plausibility of 10 Sci-Fi Concepts]

Next, however, the team had to find some way to capture the speedy paths of images as they zoomed across a wall.

"The key piece of equipment was the camera that allows us to essentially freeze light in motion," Faccio told Live Science. [Video: How to Freeze Light]

To catch time reversal in the act, the team created an illumination front by projecting a single line of light on a screen and moving that line across the screen faster than the speed of light. At the same time, they captured the reflected light in motion using a super-high-speed camera. The camera snapped photos in a few picoseconds, or trillionths of a second, during which time photons travel just a few feet.

Sure enough, the camera captured the line on the wall moving in the opposite direction from the way they moved the line, as if it had traveled backward in time.

In a second experiment, the team verified an even more bizarre effect, called pair creation and annihilation. (Robert Nemiroff, a physicist at Michigan Technological University, predicted this effect for astronomical objects in a study posted online in May 2015 in the preprint journal arXiv.)

Faccio and his colleagues had an illumination front travel across a curved screen. As the speed of the projected lines exceeded light speed, a pair of lines was created, and the two lines moved away from each other. Using a different curvature, the pair of lines moved toward each other, merged and then annihilated each other, the researchers reported Friday (April 15) in the journal Science Advances.

The findings may have implications for the researchers' corner-peering cameras. This kind of "supersight" requires scientists to analyze the paths that light particles take as they bounce and scatter off various objects. Normally, light travels so fast that, to the human eye, the light coming from many different locations seems to appear instantaneously, making it impossible for the eye to resolve these different light paths and "see" behind corners.

But because high-speed cameras can capture the light in motion, researchers can reconstruct the shape of objects that might not be in the immediate line of sight. However, the mathematical calculation of these paths would need to account for the possibility that some of the light rays they see are time-reversed, because they are coming from an illumination front, Faccio said.

The new findings apply to any type of wave, Faccio said. For instance, there may be certain instances when a seismic wave bounces off a slanted piece of rock deep below Earth's surface, pointing to earthquake activity in one direction, when, in fact, the temblor occurred in the opposite direction, Faccio said.

The new paper also has some other interesting implications, said Nemiroff, who was not involved in the current study.

"I am not sure that either Lord Rayleigh nor [the paper's authors] were aware that sonic booms are the sound equivalent of illumination-front pair-creation events," Nemiroff told Live Science in an email. "With light, you first see a flash when a pair event is created, but with sound, you hear a boom."