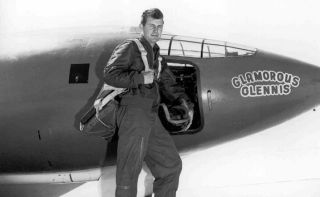 Chuck Yeager and the X-1 research plane that broke the sound barrier in 1947. It can be seen today at the Smithsonian Air & Space Museum in Washington, D.C.
(Image: © Air Force Test Center History Office)

The speed of sound varies depending on the temperature of the air through which the sound moves.

Because gas molecules move more slowly at colder temperatures, that slows the speed of sound; sound moves faster through warmer air. Therefore, the speed required to break the sound barrier decreases higher in the atmosphere, where temperatures are colder.

Scientists are interested in the speed of sound, according to NASA, because it indicates the speed of transmitting a "small disturbance" (another way of describing a sound wave) through a gas medium.

The transmission of the disturbance takes place as molecules in the gas hit each other. The speed of sound also varies depending on the type of gas (air, pure oxygen, carbon dioxide, etc.) through which the sound moves.