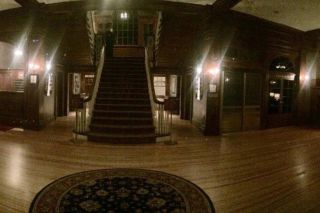 A man visiting the hotel that inspired the Stephen King novel "The Shining" captured this haunting image during a recent stay at the Stanley Hotel.
(Image: © Henry Yau/Instagram)

A visitor to a famous—and famously haunted—hotel in Colorado claims to have captured a ghostly image.

According to a CNN story, "Tourist Henry Yau recently took a picture at the Stanley Hotel in Estes Park, Colorado, which appears to show two ghostly apparitions standing on a staircase.

In the photo, a woman can be seen at the top of the stairs in a period outfit with a child beside her." The photo has gone viral, leaving many scratching their heads and others heading to the Stanley to see for themselves.

Many commenters on social media think it's a ghost (or two), and several amateur ghost hunters have weighed in suggesting it's unexplainable. Others, however, have a pretty good idea of what it is. Researcher Kenny Biddle of the Geeks & Ghosts podcast and the "I am Kenny Biddle" blog, examined the photo and noted that Yau used the panoramic feature on his iPhone to capture a full view of the grand stairwell.

This offers a clue because the in panorama mode the camera doesn't just take one photo but instead scans across the scene rapidly. Biddle notes that "Panoramic images are not taken in the same fraction of a second as a normal images are. They take several seconds … which would allow Yau to start taking his panoramic image at one end of the room, and another guest or two to hit the halfway point down the stairs, turn the corner, and begin the second set of stairs to the floor as Yau ends his panoramic image on the other side of the room."

Odd glitches using the panorama function on cameras are common, and many websites display hundreds of bizarre and double images. A Tumblr account titled "Panorama Fail" offers dozens of accidental digital grotesqueries. The "ghost" is "most likely just a guest that was captured coming down the stairs while a panoramic image was taken over the course of several seconds," Biddle concludes.

Though some have dismissed the image as an artifact of the panorama feature, Biddle notes that "when looking at a close up of the alleged ghost and second ghost (to the left of the more solid looking figure), we see that the features of both figures match up: the hair, the spaghetti-strap top, the height of the head, shoulders, and the top of the dress. This is a double image of the same person, not someone else. This effect was caused by the low light environment, slower scanning speed due to the camera trying to take in more light, and the movement of this person as they rounded the corner."

Yau claims that he doesn't remember seeing anyone at the top of the staircase when he took the photo, but it's quite possible that he simply didn't notice the woman as she appeared and turned at the top of the stairs, as he was trying to hold the camera steady and take the photo. (Yau also claimed that he waited until there was no one in the area when taking the photo, though two people can be clearly seen on the left side of the photo.)

How the unexpected hotel guest was dressed likely also played a role in how her image was interpreted; she seems to be wearing a classic black or dark dress (as befits a fancy, well-known hotel); had she been wearing a yellow blazer and carrying a large Target shopping bag speculations about her spectral origins would likely have been scuttled.

Upon closer inspection there is nothing remarkable in the image; it's a perfectly ordinary blurry, double image common in long exposure and panoramic iPhone photographs. Had it been taken in any number of other locations, it would not likely have attracted such attention. So why is image played up as a mystery? The answer lies in its context.

Context plays two roles in the creation of "spooky" photos. Most people (that is, non-professional photographers) routinely take photos that are flawed in some way, or that have odd or unusual images in them, including flash reflected "orbs," odd shadows, blurry body parts, double exposures, objects behind a person seemingly coming out of their heads, and so on. Usually they are ignored or deleted, unless the photographer (or someone else) decides that there's some reason why the photo might be of something supernatural.

The photo was taken at a doubly famous hotel—not only is it where the Stephen King-scripted, Stanley Kubrick-directed horror classic "The Shining" was filmed, but it's also claimed to be one of the most haunted hotels in the country. In fact the hotel specifically advertises itself as a paranormal destination and caters to ghost hunting tourists. Because of this, guests there are more likely to see ghosts (in person and in photos) than in comparable non-haunted lodgings—and this is true whether ghosts exist or not.

Ghost Stories: The Science Behind Sightings

This is because of a psychological process called priming, in which our expectations can influence our interpretations. To some degree we see what we want or expect to see—and that can include ghosts. People who are aware of a building's haunted reputation are more likely to take many photos, and anything odd or even potentially mysterious in those photos is likely to be considered evidence of ghosts.

A person could take an equal number of similar odd photos at a location not assumed to be haunted—a local supermarket or lake shore, for example—and the odd photographic artifact would not be as closely examined nor interpreted as anything mysterious, just a flawed photo.

The second contextual factor is of course that the Stanley hotel and others like it have a vested economic interest in promoting such photos as ghostly—or at the very least maintaining an agnostic stance about them. This isn't necessarily cynicism but pragmatism: There is no publicity to be gained by casting any doubt a claimed ghost photo taken in their hotel that's making news.

Biddle told Discovery News, "This is a classic example of inexperienced investigators and fluff piece media jumping the gun and promoting an easily explainable anomaly as something supernatural rather than doing legitimate investigative/detective work to figure out the mystery. It's the reason paranormal investigation remains in the land of pseudoscience." Whether ghosts haunt the Stanley remains to be seen, but it's unlikely that Yau's staircase double exposure is one of them.