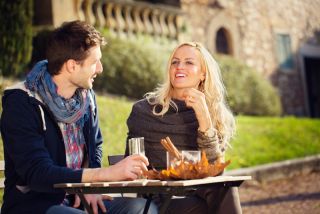 Like it or not, money has a say in whether people get into or stay in romantic relationships. But it's surprisingly hard to know for sure just how much the almighty dollar can influence your decisions about whether to swipe right on Tinder, or even to step out of a committed relationship.

Now, a new study shows that having more money, or even just thinking that you do, could influence your dating life.

In the study, researchers looked at whether people who were coached to feel as though they had more money would change their mating strategies (even though the actual amount of money these people had did not change). For example, the researchers tested whether people who felt like they had more money would be less satisfied with their current partners, or whether they would behave more openly toward an attractive stranger.

The study included about 180 Chinese college students who were involved in monogamous, heterosexual relationships. In two experiments, the researchers tried to suggest to some participants that they had more money, and to others that they had less money than they actually did. The researchers did this by having the participants fill in the blanks in essays that painted a richer or poor picture of their lives, or by having them respond to questions that were designed to make them feel relatively rich or poor.

Before and after being primed to feel differently about their own financial situations, the participants rated their partners on factors such as attractiveness and sexiness. [13 Scientifically Proven Signs You're in Love]

In other words, the subjective feeling of having more money made the men raise the bar for the physical appearance of their long-term mates.

Interestingly, this didn't seem to be true for women in the study. Being primed to feel that they had more money didn't significantly change the women's satisfaction with their current partners' physical appearance.

A second experiment was designed to test participants' tendency to approach attractive strangers they encountered after being primed with ideas of money. This time, both men and women who were primed to feel that they had more money showed greater interest in a more-attractive mate.

The findings fit with a hypothesis based on evolutionary psychology, the researchers said. Evolutionary psychology holds that people's psychological traits — including what they look for in a mate — have been shaped throughout human evolution, and often serve to maximize oppurtunies for reproduction and survival. Taking this view, people would be expected to change their mating strategies and preferences in response to certain conditions of their environment in order to maximize their reproductive benefits. In other words, if your own resources (here, more money) allow you to afford a better deal (here, a more attractive partner), you might go for it.

But while the new findings support this evolutionary-based idea, they don't prove it.

"Evolutionary psychology theories of mating and mating behavior are quite controversial. There are many other influences that must be taken into account," said Mary Gresham, a psychologist in Atlanta who was not involved in the new study.

For example, culture could partly explain why people's mating strategies change depending on their own financial status, she said. People from cultures that highly value having a lot of money may take that into account when searching for a mate, but they are doing so because of their culture, not evolutionary instinct, Gresham said.

In addition, people's childhood experiences, relationships with their parents and deliberate intentions may also be at play in their search for a mate. [5 Ways Love Affects the Brain]

"We know that mating behavior is multidetermined and changes with maturation," Gresham said. "The study's findings may be valid, but the explanation is not likely to be so simplistic" as solely being a matter of evolutionary trends.

Further research should include people of other cultures and ages, she said. "It is an interesting topic for conversation but not a proven theory," she said.