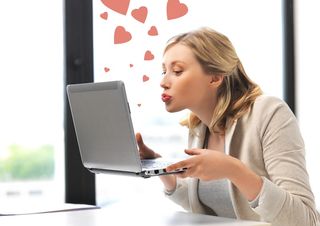 Attention, online daters: If you want to get lucky in love, it's better to go with the screen name AdorableAnnie, rather than ZoltantheDestroyer.

That and other insights come from a large new review of online dating tactics and their success levels. Among the findings: picking a screen name that starts with a letter in the first half of the alphabet may be as important as a pretty photo.

Another insight? It's best to survey the pickings on a dating site before committing to that service. "Most people just don't do this," said study co-author Khalid Khan, an epidemiologist at Queen Mary University of London.

Instead, people tend to register for a site, and then check out their options. This means they may miss the chance to find the site that offers them the best matches, Khan said.

As more and more people find love online, the art of dating has become a science, with data scientists poring over millions of fleeting interactions. For the current study, the motivation was personal: Dr. Sameer Chaudhry, an internist at the University of North Texas in Dallas, was having no luck finding love online. So he looked to his friend Khan, whose research focuses on aggregating scientific data to figure out the best practices in health care systems, to help him figure out what he was doing wrong. [6 Scientific Tips for a Successful Marriage]

Khan and Chaudhry searched the literature for studies on attraction and persuasion, including studies that specifically focused on online dating.

"The findings from this literature are directly relevant to how one can employ online dating to be most attractive," to potential mates, Khan told Live Science.

The duo decided to focus on 86 studies that looked at how often an initial contact that two people made online translated into face-to-face meetings.

The researchers found that people whose screen names started with letters in the first half of the alphabet got better responses — the effect almost as strong as that of posting an attractive photo. It's not clear why this might be, but other studies have found that people whose names start with letters early in the alphabet tend to have more education and higher incomes, or it may have to do with a quirk in how search results are displayed, the researchers speculated.

In addition, screen names containing a negative word, such as "Bug" and "Litter," went over more poorly than those with generally positive connotations, such as "Fun2BeWith," according to the findings.

The team also found that the men in the studies were more drawn to screen names that highlighted looks, with monikers such as "Cutie," while women responded more to names highlighting intelligence, with words such as "Cultured."

People also liked easy-to-understand language in a profile. Overall, women were drawn to bravery and risk-taking rather than kindness in males, while men sought physical fitness in women. Photos that show a dater amid a group of friends — possibly even touching another person's upper arm — also do well, the researchers found.

Though humor is a prized quality, it's better to show that through a witty profile, rather than baldly stating "I'm a funny guy," the researchers found. In general, about 70 percent of a profile should be about the person and 30 percent should focus on what the person wants in a partner, the researchers concluded.

"That's the best chance that you'll find people who you're after, who are what you want," Khan said.

Online daters have better success when they send personal messages to the people they are interested in, rather than generic emails, the researchers found.

Sending out generic messages, it turns out, was one of the problems Chaudhry was having when trying to find love online.

"One of the most important things he recognized was that when approaching other people, you need to make them feel special," Khan said. "You don't indiscriminately wink or right swipe."

Other tips they gleaned may seem obvious from afar: be funny, don't write long, opinionated essays and respond quickly to someone's messages.  For webcam meetings, the researchers found it was important to sit up straight, smile, and to pay genuine compliments without coming off as fawning. And while it's important for people to present themselves in a positive light, trying to appear perfect can backfire, the researchers wrote in the paper.

Identifying the best online dating strategies seems to have paid off, at least for Chaudhry: He's been in a long-term relationship for a few years now, Khan said.

The findings were published today (Feb. 12) in the journal Evidence Based Medicine.