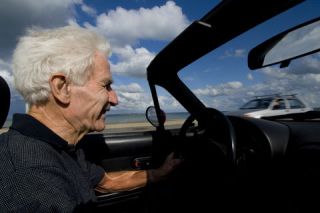 After you finish watching the Indy 500 this Sunday, you may want to have your designated driver take you home. Not only should he be sober, but he also should have no interest in motor sports.

According to Australian researchers, being a race fan makes you more likely to not only speed in your own car but also to see little wrong with it. Several factors have been found to influence a driver's attitude towards speeding and aggressive driving, including age, gender and what psychologists call "sensation seeking propensity." This thrill-seeking behavior may also be a result of a driver's environment.

Paul Tranter and James Warn of the University of New South Wales wanted to see if following professional motor sports as a fan added to the need to be fast and furious. Specifically, they considered whether social cognitive theory, made famous by American psychologist Albert Bandura, explained a fan's need to imitate their favorite drivers by pushing the limits on public roads.

In 2004, with illegal street racing becoming a problem on the streets of Sydney and Melbourne, Tranter and Warn focused on young drivers. In a survey of 180 males between the ages of 15 and 24, they measured interest in organized motor sports against attitudes towards safe driving and obeying traffic laws. Each driver's own violation history was also considered. Results showed an interest in organized racing had a direct effect on not only involvement in illegal racing but also higher violations and riskier attitudes towards traffic laws. Maybe young fans figured that if Danica Patrick can maneuver a 650 horsepower beast around an oval track for a few hours, they should be able push their modified Civic to 100 mph. Even though the researchers were careful to control for the sensation-seeking personality variable in their survey population, they still wanted to expand their study to older race fans to see if the same relationship held. In their latest study, published in the journal Accident Analysis and Prevention, Tranter and Warn looked only at drivers 25 and older with at least 2 years driving experience. Insurance companies consider this age group a much safer population. A similar survey was distributed to residents of a small NSW town and asked for three things: their level of interest in motor sports; their attitudes toward speeding and traffic laws; and their own self-reported negative driving habits. The strongest correlation in this group was between an interest in racing and a pro-speeding attitude. So, even among the safer, older group of fans, an intentional lead foot existed. So, should we put restrictor plates on all cars? No, say Tranter and Warn, but maybe a more visible safety PR campaign to the masses may help.

"There remains a need to get the message out to the driving community that speed is linked to accidents, and that attitudes that condone speeding are a road safety problem," Tranter writes. He adds that another idea would be to shift a young driver's need for risk taking to other sports, (like downhill skiing or mountain biking) that have a more positive "thrill to bad outcome" ratio. Then again, Tranter comments that the attraction expressed to him by street racers may just be, "'chicks and fast cars,' rather than a desire to engage in illegal activity." Dan Peterson writes about sports science at his site Sports Are 80 Percent Mental. His Science of Sports column appears weekly on LiveScience.