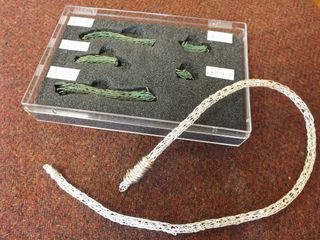 An ancient whip uncovered at a medieval English monastery may be one of only four metal scourges found in the country, according to the Nottinghamshire County Council, which manages the archaeological site.

Scourges, whips or cat-o'-nine-tails made of copper-alloy wires braided together were used by people in the Middle Ages to chastise themselves. And this particular artifact, which dates back to the second half of the 14th century, was probably used by monks at Rufford Abbey to whip themselves as a form of penance, and to ward off the Black Death, the council said in a statement.

The Black Death was a catastrophic outbreak of the bubonic plague that killed more than a third of Europe's population in the early 1330s. In England, the Black Death lasted only a year — from 1348 to 1349 — but records show that it was enough to wipe out entire families and resulted in a decline in Rufford's wool trade, which was also a primary source of income for Rufford Abbey, in the following years. [Pictures of a Killer: A Plague Gallery]

During a dig underneath the meadow at Rufford Abbey in 2014, archaeologists discovered a stain of green copper coloring the soil. But the archaeologists were unable to decipher the significance of the copper artifact until further tests linked it to a few rare scourges found at other monasteries.

A similar scourge was uncovered in the 1920s at Rievaulx Abbey, another former Cistercian abbey, in Yorkshire; and another was previously discovered at Grovebury Priory (also known as La Grava), in Bedfordshire. A third scourge was found at Roche Abbey in South Yorkshire, the council said.

The Rufford Abbey discovery is only the fourth such monastic scourge found in England, even though the metal whips were popular after the devastation of the Black Death, said Glyn Coppack, an expert in the archaeology of monasteries at the University of Nottingham, who was not involved in the Rufford Abbey excavation. Few scourges have survived since the Middle Ages because most were later melted down as scrap metal to be reused, he told Live Science in an email.

Emily Gillott and Lorraine Horsley, both community archaeologists at the Nottinghamshire County Council, made the connection between the Rufford Abbey finding and previous artifacts because of its similarities with the scourge on display at Rievaulx Abbey. Other archaeology experts also have confirmed the Rufford scourge's significance since then, the researchers said.

"Each archaeological dig at Rufford Abbey unearths something new about its remarkable history," John Knight, the committee chairman for culture at Nottingham County Council, said in a statement. "And this is another fascinating discovery which helps us to build a picture of what life could have been like for the monks living in the abbey during the dark days of the Black Death and its aftermath."

Additional details about the archaeological discovery can be found on the Nottinghamshire County Council website.